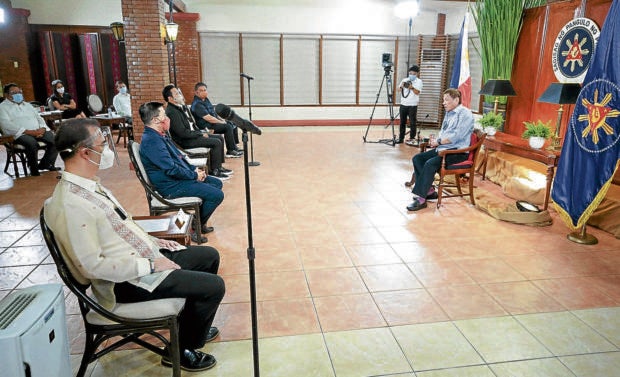 PRESIDENTIAL INTERVENTION President Duterte meets with Speaker Alan Peter Cayetano and Marinduque Rep. Lord Allan Velasco in Malacañang on Tuesday night to get the two men to honor their term-sharing deal for the House leadership. The agreement appears to have been set aside through Cayetano’s winning the equivalent of a confidence vote in the chamber on Wednesday. —MALACAÑANG PHOTO

MANILA, Philippines — Speaker Alan Peter Cayetano on Wednesday offered to resign amid a leadership crisis in the House of Representatives, stepping down ahead of the turnover of the speakership under a term-sharing agreement with his presumptive successor, Marinduque Rep. Lord Allan Velasco.

But Cayetano’s offer to resign was rejected in a vote by House members, a day after President Duterte supposedly urged the two lawmakers to honor the 2019 deal that he himself had brokered.

During a break in the deliberations on the proposed P4.5-trillion budget for 2021, Cayetano took the House floor to disclose details of the meeting between his camp and that of Velasco with the President in Malacañang on Tuesday night.

Claiming that Velasco’s camp was so insistent on immediately taking over the reins at the House, Cayetano said he was offering to step down to forestall any prolonged wrangling over the House leadership during the budget deliberations.

But Cayetano’s allies quickly moved to reject his offer, and called for nominal voting on the motion of Anakalusugan Rep. Michael Defensor.

Voting 184 in favor and one against, with nine abstentions, the House rejected Cayetano’s resignation.

In a 40-minute speech, Cayetano said he was instructed by Mr. Duterte to disclose the details of Tuesday night’s meeting, including the details of the discussions during a private huddle among himself, the President, Velasco and Sen. Christopher “Bong” Go.

According to Cayetano, Velasco and his allies, in many instances, broke the term-sharing deal they had, and announced the supposed resolution of the leadership row.

“The meeting last night was not only about the speakership, but it was also about matters of great national importance. The President clearly instructed I and Congressman Velasco, and to quote, ‘Alan, it’s up to your office to make an announcement.’”

“I went into the meeting trusting the wisdom of the President. Just like in 2019 July, agreements again were made last night, and just like in previous instances, they were immediately broken by Congressman Velasco,” he said.

Cayetano said that in the private meeting, he assured Velasco that he would honor the term-sharing deal they forged in July 2019 if Velasco could show he had the support of the majority of the House members.

Under that agreement, Cayetano would serve as Speaker during the first 15 months of the 18th Congress then Velasco would take over and lead the House in the remaining 21 months of the term.

Cayetano said he requested that his term be extended until December so that he could shepherd the 2021 budget through the House, but Velasco refused, even with the President prodding him to agree.

“The budget must not be delayed as it will affect the government’s entire recovery program. If there is one budget in the last 50 years that is very important, it is this,” he said.

He also suggested that the turnover of the speakership be done after his 50th birthday on Oct. 28, but Velasco refused.

During the meeting, Cayetano said he hinted that Velasco showed lack of competence to lead the House during the battle against the coronavirus pandemic.

Cayetano lamented that instead of focusing on the passage of the budget, the House is distracted by a leadership crisis because Velasco refuses to honor their agreement for a change of leadership in November.

“We would have no comment on that. That’s a purely internal affair of the House of Representatives,” presidential spokesperson Harry Roque said, quoting the President as saying.

Roque reiterated that Mr. Duterte wanted Cayetano and Velasco to honor their term-sharing agreement, but that the President could not do anything if Velasco did not have the numbers.