Biden to Trump: ‘Will you shut up, man!’ 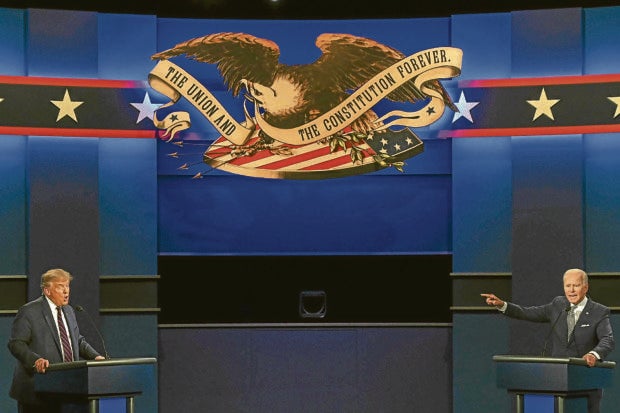 FIERCE From the opening question by moderator Chris Wallace of Fox News, the tension between US President Donald Trump and Democratic challenger Joe Biden was unmistakable and the clashing quickly got out of hand. —AFP

CLEVELAND — Donald Trump has long derided his Democratic rival as “Sleepy Joe” Biden, but the US president got a rude awakening and fierce pushback at Tuesday’s debate from a candidate who managed to keep an indignant incumbent at bay.

“Clown.” “Liar.” “Fool.” “Racist.” “Putin’s puppy.” Biden’s weighted assaults — even as he sought to remain above the fray — made clear that the Democratic challenger was not going to wilt as the two rivals engaged in a verbal slugfest the likes of which US voters have not seen on the modern debate stage.

Trump and Biden nodded politely to one another at the start. But from the opening question by moderator Chris Wallace of Fox News, the tension was unmistakable and the clashing quickly got out of hand.

With Trump refusing to directly condemn white supremacy, insisting mail-in ballots are fraudulent, attacking Biden’s son Hunter, and warning that a Biden presidency would tank the economy, Biden eventually blurted out: “You’re the worst president America has ever had.”

Interruptions became so frequent that Biden eventually lashed out: “Will you shut up, man!”

It was the closest Biden came to losing his cool—something Trump was clearly trying to goad him into doing—as they parried on issues, from the Supreme Court vacancy Trump intends to fill quickly to the coronavirus pandemic, economic woes and the integrity of mail-in ballots.

But the line clearly resonated in living rooms across America, and the Biden campaign store immediately began selling “Will You Shut Up, Man” T-shirts.

Between 10 and 11 p.m., the campaign said, “Biden for President had its best online fundraising hour of all time.”

Trump sought to bash Biden as a weak candidate who would only get dragged to the left by “radical” socialists in the party, but Biden stood his ground.

“Everything he’s saying so far is simply a lie,” Biden told viewers just a few minutes in, a refrain he repeated often throughout the night.

As the president insisted governors praised him for doing a “phenomenal” job tackling Covid-19, and that Biden would have let millions of Americans die, Biden looked directly to the camera—one of several times he did so—in an apparent appeal to undecided voters.

“The president has no plan … . He knew all the way back in February how serious this crisis was,” Biden said.

“He said he didn’t tell us or give people a warning of it, because he didn’t want to panic the American people. You don’t panic, he panicked.”

Polls show most Americans disapprove of Trump’s handling of the pandemic, a potentially decisive election issue especially in swing states like Michigan, Ohio, Pennsylvania and Wisconsin that Biden aims to reclaim after Trump won them in 2016.

And in an appeal to middle-class and blue-collar voters, Biden savaged Trump for reportedly paying little or no federal income tax for the past several years despite boasting of being a billionaire.

“They look down their nose on people like Irish Catholics and like me,” Biden said. “And people who don’t have money.”

Trump offered a vigorous defense of his “law and order” approach of recent months, saying Biden lacks the backbone to stand up to violent protesters like the president does.

“If he ever got to run the country and they ran it the way he wants to run it we would have suburbs (that) would be gone, and you would see problems like you have never seen,” Trump said.

“He wouldn’t know a suburb unless he took a wrong turn,” Biden shot back.

Mitchell McKinney, a specialist on presidential debates at the University of Missouri, told Agence France-Presse (AFP) Trump’s performance projected him as a “petulant” president seeking to taunt and mock his rival.

“Joe Biden avoided any major gaffe or stumble tonight that would feed into the Trump narrative that Biden is too old or not fit for serving as president.”