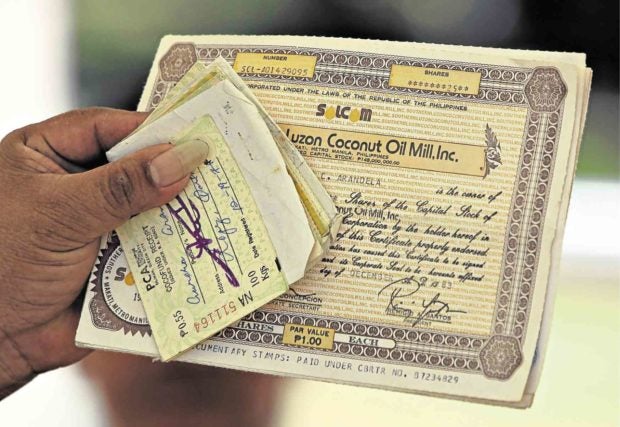 PROOF  A farmer in Quezon province shows documents and receipts of his parents’ contribution to the coconut levy fund collected during the administration of the late dictator Ferdinand Marcos. INQUIRER file photo / DELFIN T. MALLARI JR.

MANILA, Philippines — The Senate on Monday approved on second reading a measure seeking to establish a trust fund to benefit the country’s coconut farmers, more than a year after President Rodrigo Duterte vetoed a similar bill due to the lack of “vital safeguards.”

Under the bill, the trust fund will be managed by a board that will craft plans on the utilization of the levy collected from coconut farmers, which was estimated to have grown to over P100 billion.

The collection of levy from coconut farmers started in 1971 during the term of late dictator former president Ferdinand Marcos. After the fall of the Marcos regime, various suits were filed to give the fund’s control to coconut farmers.

“I wish to thank my colleagues for passing this bill. It’s a hard bill. It’s really important to our coconut farmers,” Senator Cynthia Villar, chair of the Senate agriculture committee, said after second reading approval of the measure.

Villar sponsored and authored the bill while Senate President Pro Tempore Ralph Recto and Senators Imee Marcos and Francis Pangilinan are the co-authors.

(After a long time, we can finally give the coconuts farmers what is rightfully theirs. While the amendments we proposed were not included in the final version and that some of the provisions were watered-down, it was still better that the bill was approved to give support to our coconut farmers.

(We will just push for the possible amendments we can introduce to the law if we see that will benefit the coconut farmers.)

During the period of amendments, Pangilinan, together with his fellow opposition senators, sought to include a farmer representative and a representative from the Department of Agriculture in the Trust Fund Management Committee, which will be tasked to set the investment strategy of the trust fund.

The Senate did not adopt the said amendment.

Under the current version of the Senate bill, the committee will be composed of representatives from the Departments of Finance, Budget and Management, and Justice, Pangilinan noted.

“We respect the decision of the body, but we strongly believe that our coconut farmers should be involved in all aspects of the decision-making process in the management of the coconut levy funds,” Pangilinan said.

“It is, after all, their money; the blood, sweat, and tears of our coconut farmers,” he added.

Under the bill, Pangilinan said coconut farmers are defined “as owners or leaseholders of coconut farms that are not more than five hectares, tenants who till or supervise the cultivation of the coconut farms, or farm workers or laborers.”

Further, a Coconut Farmers and Industry Development Plan that will “set the directions and policies for the development and rehabilitation of the coconut industry within 50 years” will be established under the bill.

Pangilinan said the bill provides for the annual allocation of the trust fund available for disbursement which should not be less than P5 billion per year “but which can be more if the funds permit.”

He said the annual allocation of the trust fund will be:

The upper chamber is expected to give its final approval to the measure Monday next week. Similar bills are still pending at the committee level in the House of Representatives.

“The coco levy trust fund bill is a priority because it seeks to end over four decades of injustice and poverty of our coconut farmers from whom the levy was extracted,” Pangilinan went on.