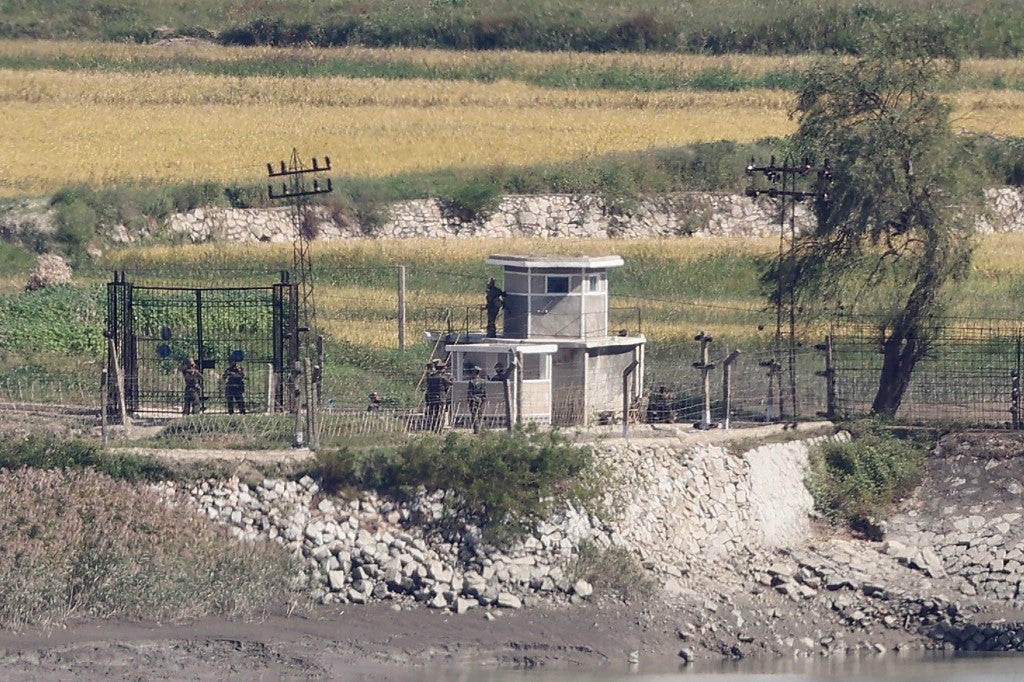 North Korean soldiers are seen at a military fence next to a guard post in the North Korean border county of Kaepoong, as seen across the Demilitarized Zone (DMZ) from the South Korean island of Ganghwa on September 25, 2020. – North Korean leader Kim Jong Un apologized on September 25 over the killing of a South Korean at sea, calling it an “unexpected and disgraceful event”, Seoul’s presidential office said. (Photo by – / YONHAP / AFP)

SEOUL, South Korea — North Korea on Sunday warned the South Korean navy to stop crossing into its territorial waters as ships search for the body of a Seoul official shot dead at sea by Pyongyang’s soldiers.

State media said the North will begin its own search for the body and warned that the South’s naval operations threatened to raise tensions.

The fisheries official was shot dead by North Korean soldiers on Tuesday — the first killing of a South Korean civilian by Pyongyang’s forces in a decade — prompting a rare public apology from leader Kim Jong Un.

Seoul’s military has accused the North Korean soldiers of pouring oil over the man’s body and burning it after shooting him.

The death was an “awful case which should not have happened”, the North’s official KCNA news agency said Sunday, adding that Pyongyang was organising a search operation in its waters to help locate the body.

It said the country was considering “procedures and ways of handing over any tide-brought corpse to the south side … in case we find it during the operation”.

But it warned that South Korean vessels near the site of the incident had crossed into North Korean waters.

“We can never overlook any intrusion into our territorial waters and we seriously warn the south side against it,” KCNA said.

“It arouses our due vigilance as it may lead to another awful incident.”

South Korea on Saturday demanded the North carry out a further probe into the shooting and said it would request a joint investigation if necessary.

Apologies from North Korea are unusual and the message from Kim came with inter-Korean ties in a deep freeze and nuclear negotiations between Pyongyang and Washington deadlocked.

There have been no North Korean media reports on the contents of the letter from Kim.