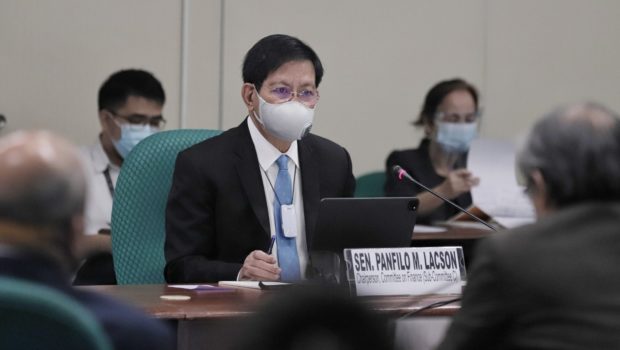 MANILA, Philippines — Questionable insertions in the National Expenditure Program may prompt the Senate to take out lump sums in the proposed 2021 national budget, Sen. Panfilo Lacson said on Saturday.

According to Lacson, he heard from the appropriations committee of the House of Representatives that lawmakers did not touch the NEP.

“But the NEP has all their insertions — because the DPWH [Depatment of Public Works and Highways] put it in the addendum,” Lacson said in Filipino in an interview with AM radio station DWIZ.

Lacson, who has continuously sought to curb pork in the national budget, said the Senate would go over the list of lump sums containing “preventive maintenance, tertiary roads, and secondary roads” to check if these had been included in the DPWH proposed budget.

“I’m having the addendum checked. We also have a list that someone sent to us. Will it tally with the lump sums? If it doesn’t, then it’s not an addendum. It’s a separate list, and my point about that is that the executive department, especially an agency like the DPWH, cannot participate in lawmaking,” Lacson said in Filipino.

If the figures in the addendum would not match the lump sums, Lacson said the Senate would remove these illegal appropriations from the proposed budget.

“We will remove them because they’re illegal. It’s not right,” he said.

“How can we allow that?” he added. “We may extend our understanding that you ran out of time so that you just made it a lump sum and you sent an addendum. But if many items  look like Martians in what they said was a scrutinized lump sum, we won’t accept it.”

On the possibility that DPWH and some lawmakers connived on the addendum details, Lacson said:  “That’s really clear. They adopted the NEP. Why did they adopt it when it’s already theirs? That’s why there were rumors that came out that they were fighting among themselves — why are the pork allocations not equal?”

Previously, Lacson raised the alarm over the P469 billion in lump sums and reappropriations under the proposed budget of the DPWH.

He also alleged that haggling between DPWH and lawmakers caused the delay of the DPWH 2021 proposed budget.