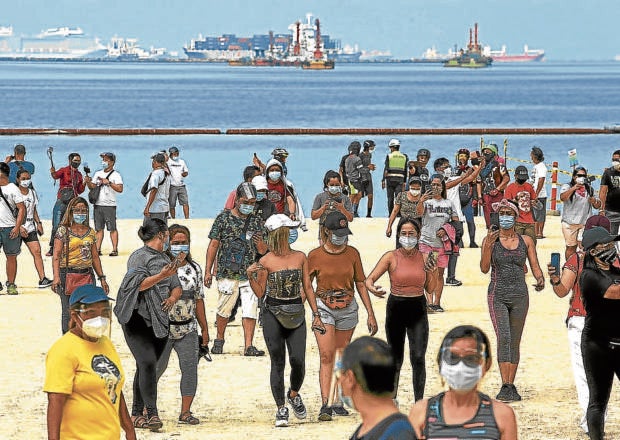 PREVIEW Visitors enjoy the “white sand”—actually crushed dolomite—beach on the Manila Bay shore after it was opened to the public for one day on Sunday.—MARIANNE BERMUDEZ

MANILA, Philippines — Is “Duterte Beach” a thing now? It would seem so, if Google Maps is to be believed.

On Saturday, Google Maps was displaying a stretch of the Manila Bay shore as “Duterte Beach.” The pin was geotagged to the Ermita Center Building, helpfully stating that the beach is a “playground.” It has since been edited to read as “Dolomite Beach.”

But who put it there? And why?

Mikael Angelo Francisco, a science communicator and the editor in chief of local science blog Flipscience, surmised that a “naughty” local guide could have uploaded the tag.

Francisco explained that tags on Google Maps, especially searchable ones, are mostly crowdsourced from “local guides,” or Google users who are knowledgeable of local areas. Francisco, who himself has uploaded tags and edited existing ones, said that based on experience, Google does not individually check tags or pins on Google Maps.

“As far as I know Google doesn’t really check it themselves, they don’t have a team that approves it or anything, but if a local guide has enough upvotes which makes him credible enough, the tag appears,” Francisco said, explaining that Google used to have a “mapmaker feature” but that has since been discontinued.

Google Map Maker was a Google-owned map editing service. With Map Maker, user contributions used to increase map quality, and changes to Google Map Maker were intended to appear on Google Maps only after sufficient review by Google moderators, its website said.

But in 2017, Google retired Map Maker and merged it with Google Maps.

And Duterte Beach? As of Saturday afternoon, it had a mere 2.4 star rating, with some commenting that it is a “waste of money and resources.”

But curious Filipinos and a handful of foreign vloggers flocked to Manila Bay on Sunday to see the artificial white sand overlaid on a stretch of the shore as part of the government’s efforts to “beautify” the polluted body of water.

Photos showed crowds, while wearing face masks, were not following the 1-meter physical distancing rule, despite the presence of police and marshals.