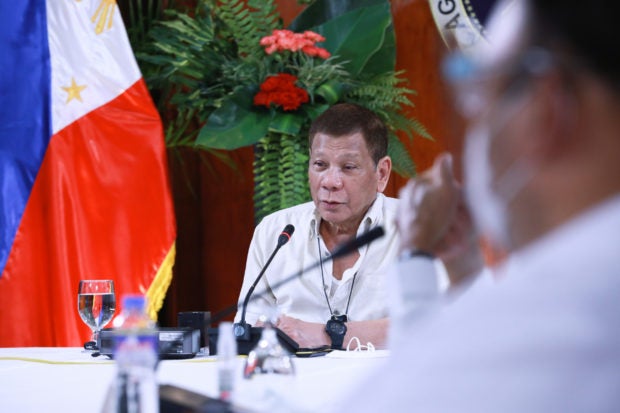 President Rodrigo Roa Duterte talks to the people after holding a meeting with the Inter-Agency Task Force on the Emerging Infectious Diseases (IATF-EID) core members at the Malago Clubhouse in Malacañang on September 14, 2020. ACE MORANDANTE/PRESIDENTIAL PHOTO

The President broached the idea of dismantling PhilHealth during a Wednesday meeting with leaders of Congress, including Sotto, to discuss measures that would eradicate red tape and corruption in government, including pressing matters related to the Universal Health Care and PhilHealth law.

At the meeting, Sotto advised Duterte against rushing to abolish and privatize PhilHealth.

“He said he wanted PhilHealth abolished or privatized but I said it might be better to wait a few months and see how the new administration performs and that I have a bill making the Secretary of Finance the chair of the Board instead of the DoH (Department of Health) Secretary. He agreed to my proposal,” Sotto said.

“I explained that Philhealth is an insurance corp and not a health entity,” he added.

Corruption allegations surrounding PhilHealth prompted the change in its leadership with former National Bureau of Investigation Director Dante Gierran appointed as the new president and CEO.

He replaced Ricardo Morales, who is now among those recommended to be charged in court in connection with alleged corruption within the agency.

When the issue of red tape and corruption in government was taken up, Sotto said the President urged them to put more teeth to the law against excessive bureaucratic paperwork.

“He (Duterte) wants to further amend the anti-red tape and ease of doing business law. In fact, he is willing to be summoned if needed. I told him the better word is invite. But only if necessary,” the Senate leader told reporters in a Viber message.

Sotto said he promised to send the President first a copy of a bill that Congress would come up to amend the said law.

Duterte ‘willing’ to be summoned in hearings on bills vs red tape, corruption

Instead of health secretary, Sotto wants finance chief to head PhilHealth board