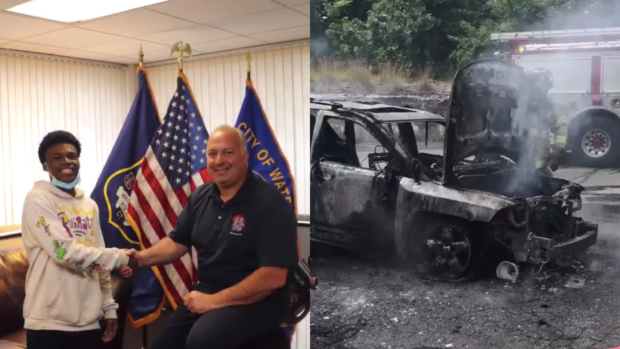 A teenager is being hailed a hero after saving a woman and her three children from a burning car in Connecticut in the United States.

Justin Gavin, 18, was walking down a street when he saw the vehicle on Sept. 9, as per the Waterbury Police Department’s Facebook post the day after.

He then jumped into action and rushed toward the burning car. Gavin helped the mother escape by opening one of its doors.

September 9th 2020 – Chief Fernando Spagnolo thanks Justin Gavin (age 18) for helping to save a mother and her three children from a burning car.Great job Justin!

After freeing the mother, he spotted her three children in the back seat and returned to save them.

“As the flames grew larger, Justin pulled all three of the kids from the car, including a 1-year-old baby in a car seat,” captain Michael DaSilva said in a video on the department’s page.

Following the rescue, police chief Fernando Spagnolo honored and thanked Gavin with a “challenge coin.” The chief hopes that the token will remind the teen of his heroic deed and the lives he saved.

Gavin later told CBS-affiliate WFSB that the incident made him reflect on life.

“Life is too short,” he said, “so I just thought if that was me in that situation, I would want someone to help me.” Ryan Arcadio /ra

Quinta may intensify as it exits PAR; LPA west of PH being monitored

Typhoon Quinta may intensify as it exits PAR; LPA west of PH being monitored