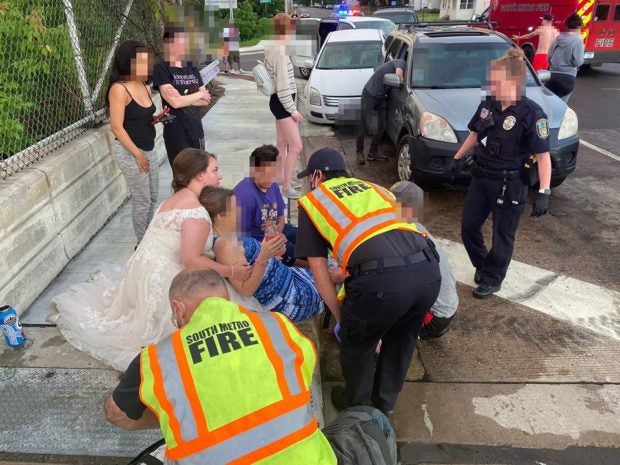 A newly married nurse still in her bridal gown did not hesitate to help a car crash victim after passing by the accident in Minnesota, USA.

Rachel and Calvin Taylor were heading home after their wedding when they spotted Tammy Peterson being dragged off a road on June 21. Peterson had been hit by a car after checking on her son who had also figured in a car accident moments before, as per CBS-affiliate WCCO last Friday, June 26.

Following the crash that injured Peterson, Rachel told St. Paul Pioneer Press she could see a gash in the mother’s right leg. Rachel then immediately left her car and tended to Peterson on the side of the road.

Calvin later posted on Facebook a photo of his wife holding Peterson while they were surrounded by authorities. He explained that Peterson’s injury reached her femur and Rachel comforted her while he called 911.

“Rachel held this woman and talked to her so nicely and helped her as well as the paramedics that came later,” he added. “She held her for at least 15 minutes until the EMTs got her on a stretcher.”

On our way back to our home after an amazing and beautiful wedding day, literally blocks from our new home, we saw a…

After the accident, Rachel explained that she had learned how to calm others while working with women in labor in nursing school.

“I just talked to her. I said, ‘You’re so strong. You’re so brave. I’m so proud of you,’” Rachel stated in the report.

Peterson also expressed her gratitude for the nurse, saying, “She was awesome and helped save my life by keeping me focused, and calm. She certainly is a gifted angel and chose the right career path.”

Peterson’s family has since set up a GoFundMe page to raise money for the mother’s medical expenses. Meanwhile, Rachel and Calvin left for their scheduled honeymoon the morning after helping Peterson.

“Rachel and I are on our way to our honeymoon, and I am still blown away that she got out of the car in a scary situation to do what she does best,” Calvin said. “I can’t wait for a hospital to scoop her up so she can make a difference in people’s lives every day.” Ryan Arcadio /ra

Couple weds at hospital so grandmother can attend ceremony