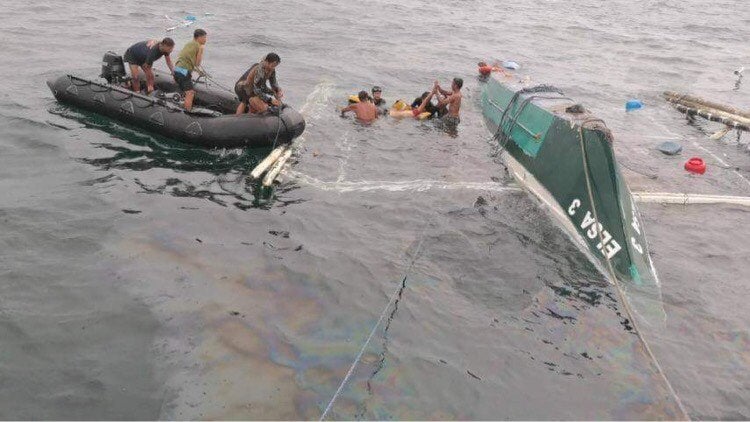 ZAMBOANGA CITY—A boat master died and four fishermen were rescued on Monday (Sept. 14) when their boat capsized off San Mateo Point at the village of Sinunuc here.

The lone fatality, Enricky Brocka, 55, was declared dead in the Zamboanga City Medical Center (ZCMC) after the boat he and the fishermen were riding capsized.

Delos Santos said the Navy vessel got closer to the capsized boat and rescued the four fishermen. The Navy men were told that Brocka was still in the boat.

Navy rescuers were deployed to pull out Brocka from the boat but he was already unconscious when he was taken out of the water.

Navy men tried to revive Brocka and rushed him to ZCMC,  where he was pronounced dead.

Delos Santos said two of the rescued fishermen were Brocka’s two sons Erickson, 19, and Richard, 30. The others were Oray Gay, 27; Richard, 30 and George Alvarasen, 36.

The four are now being treated at the Camp Navarro General Hospital.

All five of were from Pagadian City. They left Pagadian on Aug. 22 for fishing operations off Siocon town in Zamboanga del Norte.

On Sept. 13, they went to Zamboanga City to buy ice to preserve their fish catch. As they returned to the Siocon fishing grounds, they were caught up in bad weather.