Taiwan says it has Vatican assurances on China accord | Inquirer News

Taiwan says it has Vatican assurances on China accord 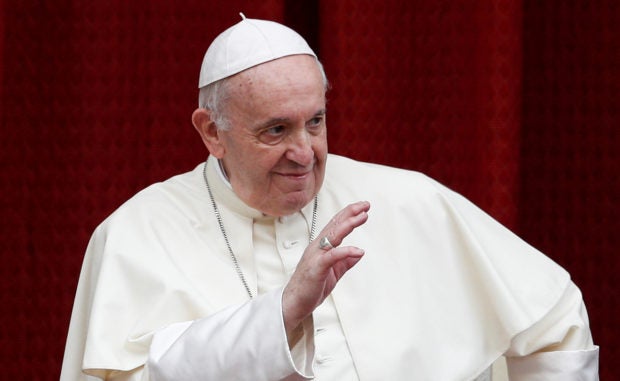 FILE PHOTO: Pope Francis arrives for the first weekly general audience to readmit the public since the coronavirus disease (COVID-19) outbreak in the San Damaso courtyard at the Vatican, September 2, 2020. REUTERS/Guglielmo Mangiapane

TAIPEI — The Vatican has asked Taiwan not to worry about the extension of a deal between the Vatican and China on the appointment of bishops as it was a religious matter and not a diplomatic one, the island’s foreign ministry said on Tuesday.

Pope Francis has signed off on a two-year extension of the agreement that critics have condemned as a sell-out to the communist government, a senior Vatican source said on Monday.

The Vatican is Chinese-claimed Taiwan’s sole European diplomatic ally and the government has watched with concern as the Pope has moved to improve relations with China. Taiwan has formal ties with only 15 countries, largely due to Chinese pressure.

“Our side has continued to receive assurances from the Vatican, that the bishops agreement with China is religious, not about diplomatic relations, and asked us not to worry,” Ou told reporters.

Taiwan hoped the agreement can help improve religious freedom in China, but since it was signed two years ago repression had actually worsened, with believers jailed and churches torn down, Ou said.

China’s constitution guarantees religious freedom, but in recent years the government has tightened restrictions on religions seen as a challenge to the authority of the ruling Communist Party.

Critics say this has made the deal a farce. The Vatican says no deal would have risked causing a schism in the Church in China.

The two-year provisional deal, which gives the pope the final say on the appointment of bishops, took effect on Oct. 22, 2018 and, if the Chinese side agrees, which is seen as virtually a given, it will be extended without any changes, the Vatican source said.

Catholics in China are split between a state-backed “official” Church and a “non-official” underground Church that remains loyal to Rome. Both sides now recognise the pope as supreme leader of the Catholic Church.