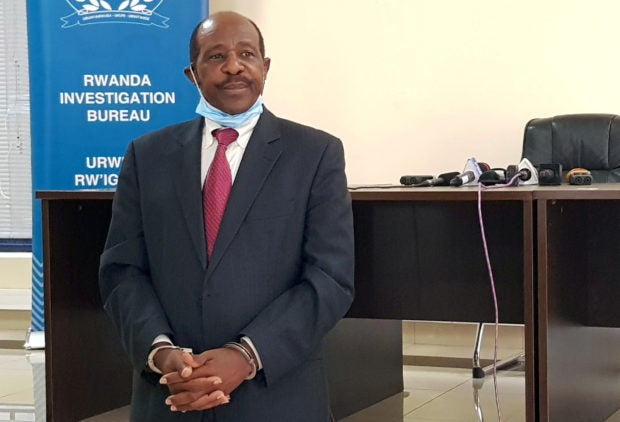 FILE PHOTO: Paul Rusesabagina, the man who was hailed a hero in a Hollywood movie about the country’s 1994 genocide is detained and paraded in front of media in handcuffs at the headquarters of Rwanda Investigation Bureau in Kigali, Rwanda August 31, 2020. REUTERS/Clement Uwiringiyimana

KIGALI, Rwanda — Paul Rusesabagina, portrayed as a hero in a Hollywood movie about Rwanda’s 1994 genocide, declined to plead on Monday to all the 13 charges facing him, demanding he be allowed to plead to each separate count in a case that has also thrust a spotlight on to President Paul Kagame’s government.

Rusesabagina, who once called for armed resistance to the government in a YouTube video, appeared in a Kigali court accused of terrorism, complicity in murder and forming or joining an irregular armed group, among other charges.

His trial promises to be the most high-profile yet in a string of cases against Kagame’s opponents.

Brought to court handcuffed in a van inscribed “RIB” for Rwanda Investigation Bureau, the 66-year-old Rusesabagina wore a tan suit and an anti-coronavirus mask. He sat pensively before responding.

He told the court that he had contributed 20,000 euros ($24,000) to the National Liberation Front (FLN), the military wing of the Mouvement Rwandais pour le Changement Démocratique, which he co-chairs.

“FLN killed people,” he acknowledged. “If there are bad acts that were done against the people, I regret that and I ask forgiveness to the families of victims.”

Rusesabagina refused to enter a plea for any of the charges. He was due to appear again on Thursday to apply for bail.

After the genocide, Rusesabagina acquired Belgian citizenship and became resident of the United States. He became a vocal critic of Kagame, whom he accused of stifling opposition, an accusation the government denies.

Rusesabagina has not been allowed to meet lawyers appointed by his family, they said in a statement. But one of his government-appointed lawyers, David Rugaza, argued he was on trial for exercising freedom of speech.

“He got a Belgian citizenship in 1999,” Rugaza told the one-judge hearing. “Rwanda is trying a foreign citizen (for) freedom of expression that he enjoyed while abroad.”

Some in Rwanda, including Kagame, have accused Rusesabagina of exaggerating his heroism, which he denies.

It is still unclear how Rusesabagina came to be in Rwanda. His family say he disappeared in Dubai.

The court struck out a defense objection that the arrest was irregular, ruling that it had jurisdiction because Rusesabagina was arrested in Rwandan territory, without providing further details.

Kagame has ruled Rwanda since the end of the genocide and won the last elections in 2017 with nearly 99% of the vote.

He has enjoyed widespread credit and support from Western donors for restoring Rwanda to stability, cracking down on corruption and boosting economic growth in the East African nation of 12 million.

But international rights groups and political opponents say his rule is increasingly tainted by repression.

“Kagame and other government officials regularly threaten those who criticize the government,” Human Rights Watch (HRW) said in a briefing note, adding that the judiciary lacked independence and torture of prisoners was common.

The government denies accusations of torture of detainees.

Tibor Nagy, the U.S. Assistant Secretary of State for Africa, tweeted earlier this month that the United States wanted to see Rusesabagina receive a “fair trial.”

Michaela Wrong, a British author researching a book about Rwandan politics, said the trial was already putting the Kagame government under greater scrutiny.

“The Rwandan government’s traditional supporters may well start asking themselves why so many opposition activists disappear and meet violent ends in Rwanda, why so many human rights activists and journalists flee abroad,” she said.