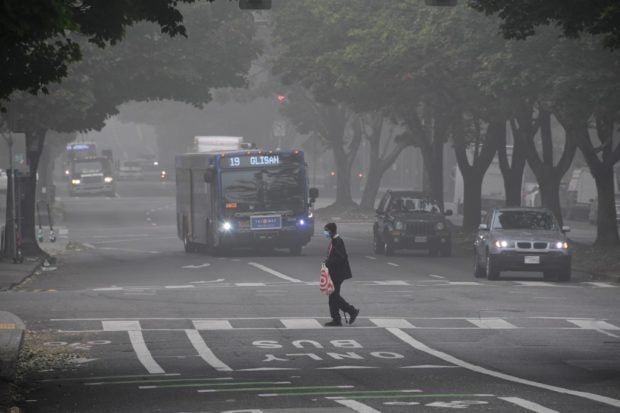 A man crosses a street in downtown Portland, Oregon where air quality due to smoke from wildfires was measured to be amongst the worst in the world, September 14, 2020. Portland, the largest city in Oregon, has been blanketed for days by a dense smog that has sent pollution meters soaring. Photo by Robyn Beck / AFP

PORTLAND, United States — The deadly fires spreading across three western US states are causing record-breaking pollution and a spate of health woes, from headaches and coughs to impaired vision, that have residents worried about the long-term consequences.

Portland, the largest city in Oregon, has been blanketed for days by a dense smog that has sent pollution meters soaring.

On Monday, the city ranked second-worst on IQAir’s live global air quality ratings lists, only behind Vancouver, to the north in Canada — which has fallen victim to the smoke from fires in neighboring Washington state.

Seattle, San Francisco and Los Angeles are all ranked among the 10 worst.

“It’s bad. It can get so smoky, it looks like fog. Sometimes, it’s so smoky you can hardly breathe,” says 55-year-old Lorain Magee, who is wearing a cloth face mask.

Magee, who is disabled, says she has suffered headaches, nausea, and blurry vision.

To try to limit her exposure, she is only going outside to walk her dog, Charlie, who is also having a hard time with the choking smog.

“He has been wheezing, sometimes he hyperventilates and chokes himself because he can’t breathe,” she explains.

Multnomah County, which includes Portland, on Monday warned residents about the “hazardous” air quality across the city’s metro area.

“NO ONE should be outside,” the county tweeted, calling on workers who must be outside to wear N95 face masks, take breaks and drink plenty of water.

Jennifer Vines, the county’s health officer, advises residents in a video message: “If you can smell smoke, you’re inhaling fine particles deep into your lungs.”

But the pollution does not keep everyone inside, or from exercising. Jamal is out jogging with a respirator mask.

“I’m training for a marathon next year so I just keep going. The mask is helping a little bit,” explains the 36-year-old African-American man, who has an athletic build.

“It’s a little harder to breathe,” he admits, acknowledging he would not advise others to exercise in the thick air. Jamal says his throat has been scratchy and his nose clogged up in recent days.

The foul air is a nightmare for local businesses which, after months of stay-at-home orders due to the coronavirus crisis, are now struggling to get customers through the doors when many just want to stay home.

Christopher Payne, who owns the Kingsland Kitchen in downtown Portland, gazes out at his empty patio.

“Last weekend, we had 80 chairs outside, and people waiting for a table. The difference is huge,” he laments.

“This week has been so trying on us. I hope that the rain will clear things and we can start to turn the next corner from next weekend onwards.”

Rain is indeed in the forecast for early Tuesday, but the overall weather conditions are not expected to improve appreciably until week’s end, local meteorologists predict.

Quezon solon – physician says she got COVID-19 jab as a frontliner, not lawmaker