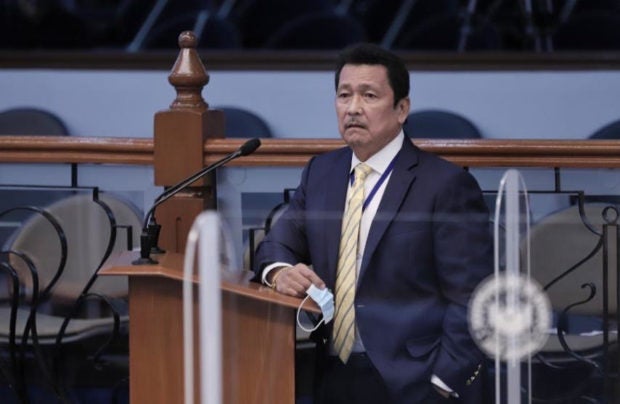 MANILA, Philippines — Senator Lito Lapid appealed to the Bureau of Internal Revenue (BIR) on Monday to tackle the measure he authored and enacted into law 10 years ago.

Lapid lamented that until now, the BIR has yet to come up with the implementing rules and regulations (IRRs) of Republic Act No. 9999 or the Free Legal Assistance Act of 2010 that would provide free legal assistance to the poor.

(Because I passed a law, the free legal assistance, it was in 2010 during the time of then President Gloria Macapagal-Arroyo…The IRR has not been tackled yet.)

(That’s why I want to ask the BIR why they are not tackling this. This has taken far too long.)

Thus, the BIR was mandated to “formulate the necessary revenue regulations for the proper implementation of the tax component” as provided for in the law.

The Supreme Court, meanwhile, was directed to craft the necessary IRRs with respect to the legal services law as well as the process of accreditation of organizations and/or associations which will provide free legal assistance.

The issue was brought up when Senator Francis Tolentino, in a privilege speech, raised fears that the laws that Congress is crafting might just end up “twisted, deformed, mutilated and become unrecognizable” in the IRRs.

“The IRRs have not only misinterpreted our laws, but ultimately defied the will of the people as the real sovereign imbibed in our laws,” Tolentino  said.

(When it’s about money, they don’t want to touch it. Whatever we do here, we will just past laws and then they won’t tackle it, what are we going to do here?)

Sotto, for his part, noted how the  implementation of the anti-terror law has been delayed also due to the  crafting of the IRRs.

“Yung anti-terror law, may mga dialogue sila na naririnig ako na hinihintay yung IRR. That’s BS. It’s already a law, its been signed by the President. Anong IRR , it’s not necessary and they  have to implement the law,” the Senate leader said.

Senate Minority Leader Franklin Drilon, meanwhile, reminded  his colleagues that while Congress has the mandate to craft laws, the issuance of rules and regulations and implementation would now be up to the executive branch.

Drilon suggested to just bring the questionable IRRs to court and have them declared illegal.