MANILA, Philippines — American authorities have promised that US Marine Joseph Scott Pemberton will continue to face court martial proceedings in the US, Malacañang said Monday.

(There was a promise made by American authorities along with a representative from the Marine corps.)

(They promised that even if Pemberton is released and the process in the Philippines ended, he will still face court martial proceedings where it will be determined if additional punishment will be imposed and if he is still qualified to remain in service.) 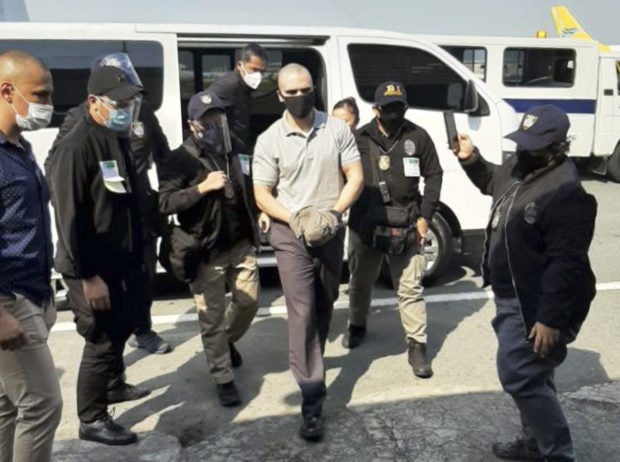 OUT OF PH Immigration agents on Sunday escort US Marine Lance Cpl. Joseph Scott Pemberton as he is about to board a US military plane that will bring him home, after almost five years of imprisonment here following his 2015 conviction for homicide in connection with the Oct. 11, 2014, killing of transgender woman Jennifer Laude. —PHOTO FROM BUREAU OF IMMIGRATION VIA AP

Pemberton, who was convicted for the 2014 killing of Filipino transgender Jennifer Laude, was deported on Sunday after he was granted pardon by President Rodrigo Duterte.

Even before he was granted pardon, an Olongapo court ordered Pemberton’s release due to his accumulated good conduct time allowance.

This was contested by the public and the Laude family but Duterte said Pemberton was not monitored for his good conduct credits and was not treated fairly.