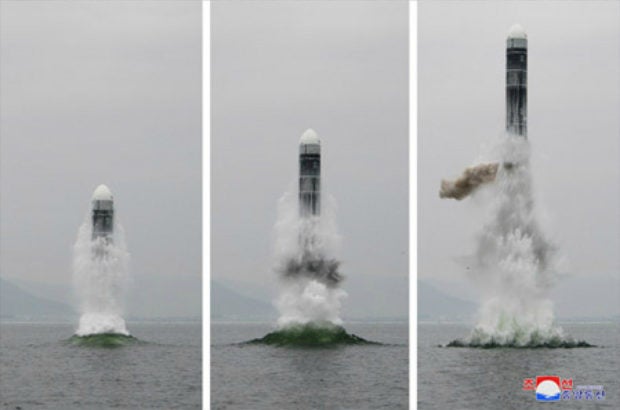 SEOUL — Satellite images suggest North Korea may be preparing to launch a submarine-launched ballistic missile at its Sinpo South Shipyard along its east coast, a US think tank said Wednesday.

“Activity remains suggestive, but not conclusive, of preparations for an upcoming test of a Pukguksong-3 submarine launched ballistic missile (SLBM) from the submersible test stand barge,” Joseph Bermudez, senior fellow for imagery analysis at the Center for Strategic and International Studies, said on its North Korea website Beyond Parallel.

The North was suspected of going through similar preparations on Friday, when CSIS unveiled satellite images showing vessels in the secure boat basin, which the think tank said resembled ships used to tow the SLBM test stand barge out to sea.

CSIS said that was the “primary indicator” but was cautious at the time as well, saying activity seen there was suggestive and not conclusive.

The North’s SLBM test this time would reinforce views that it has advanced its ballistic missile development and eyes on displaying the latest improvements around the time when the regime celebrates its anniversary of the ruling party on Oct. 10, according to CSIS.

The think tank said it found a new, unidentified vehicle and trailer present on the dock, in addition to a vessel within the secure boat basin, as seen in the last time on Friday.

South Korea’s National Intelligence Service told the parliamentary intelligence committee on Aug. 20 that submarine activities at the shipyard continued to be picked up by South Korean and US intelligence.