Trump to announce US troop withdrawals from Iraq, Afghanistan 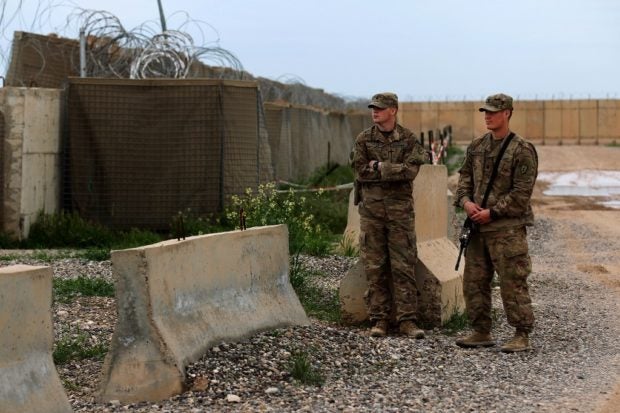 (FILES) In this file photo taken on March 26, 2020 US soldiers stand at the Qayyarah air base, where US-led troops in 2017 had helped Iraqis plan out the fight against the Islamic State in nearby Mosul in northern Iraq, before a planned US pullout. Photo by AHMAD AL-RUBAYE / AFP

WASHINGTON — US President Donald Trump will announce further troop withdrawals from Iraq and Afghanistan in the next few days, a senior administration official said Tuesday.

The official told reporters traveling with the president to expect an announcement Wednesday on Iraq, and on Afghanistan in the coming days.

During a meeting with Iraqi Prime Minister Mustafa al-Kadhemi in August, Trump said American troops would leave Iraq but gave no timetable.

The talks between the pair came with attacks on American targets by pro-Iranian fighters on the rise and the Iraqi government facing calls to expel the roughly 5,000 US troops deployed in the country as part of anti-jihadist efforts.

The US military withdrew from Iraq in late 2011, leaving a small mission attached to the US embassy.

But additional American forces were deployed a few years later to support Iraqi forces in their war against Islamic State, which carried out a devastating offensive in the summer of 2014.

In Afghanistan the US currently has 8,600 soldiers in accordance with a bilateral agreement signed in February between Washington and the Taliban.

The Pentagon said in August that its goal was to get down to fewer than 5,000 troops as inter-Afghan peace talks progress.

Trump previously mentioned in an interview with Axios that the White House aimed to reach 4,000 to 5,000 troops in Afghanistan by the November presidential election.

Under the US-Taliban deal, all foreign troops must leave the country by the spring of 2021, in exchange for security commitments from the militants.

Trump, who is trailing Democratic rival Joe Biden in the polls ahead of the November 3 election, has previously promised to bring troops home in a bid to end what he has called America’s endless wars.