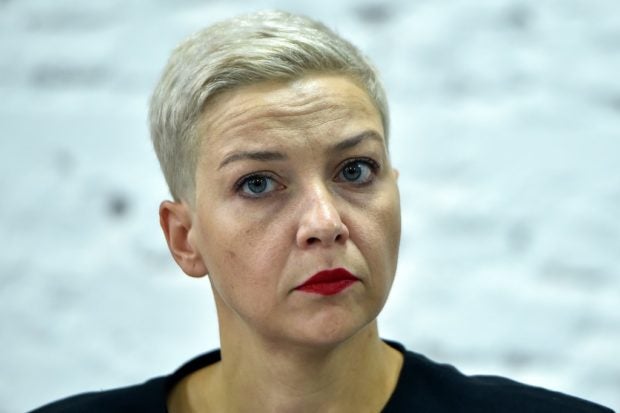 This file photo taken on August 24, 2020 shows opposition figure Maria Kolesnikova, a member of the Coordination Council formed by the opposition to oversee efforts for a peaceful transition of power. Kolesnikova’s office said witnesses described her being snatched off the street in the capital Minsk on September 7, 2020 morning by unidentified men in black. Belarusian border guards said she had been detained while trying to cross the Ukrainian border, but Kiev said she was being held after resisting a forced deportation. Photo by Sergei GAPON / AFP

MINSK, Belarus — Authorities in Belarus tried to forcibly expel leading opposition figure Maria Kolesnikova from the country but she tore up her passport in defiance and jumped out a car window to stay, her allies said Tuesday.

Kolesnikova, one of the last of the figures still in the country leading mass protests against President Alexander Lukashenko, was detained at the border early Tuesday after going missing Monday.

Border officials said she had been trying to flee the country but two colleagues with her who crossed into Ukraine said she had resisted the expulsion.

At a press conference in the Ukrainian capital Kiev, the press secretary of the opposition’s Coordination Council, Anton Rodnenkov, and its executive secretary Ivan Kravtsov described a dramatic series of events as the three were taken to the border.

Rodnenkov and Kravtsov said they were seized in Minsk as they were on their way to Kolesnikova’s flat on Monday following reports of her abduction.

Moved between various buildings with their hands tied and bags over their heads, the two men were interrogated, threatened with legal action and finally offered the chance to leave the country alongside Kolesnikova, Kravtsov said.

“What they were interested in was getting Maria Kolesnikova outside the country. They said this was necessary to de-escalate the situation in Belarus,” Kravtsov said.

The three were eventually taken in a car to the buffer zone between the two countries’ borders.

“It was clear that she was being taken by force, she was resisting. She was pushed into the back seat, she yelled that she wasn’t going anywhere,” Rodnenkov said.

“She tore up her passport into small pieces,” then went out the car window and walked back to the Belarusian border, Rodnenkov said.

Kolesnikova played a major role in the campaign of opposition candidate Svetlana Tikhanovskaya, who claimed victory over President Alexander Lukashenko in a disputed election last month.

She has since spoken at huge protests against his rule.

Police said Kolesnikova was being held on Tuesday as they investigated the events at the border.

Tikhanovskaya called for her ally to be immediately freed.

“By kidnapping people in broad daylight, Lukashenko is showing his weakness and fear,” she said in a statement from Lithuania, where she has taken refuge.

Kolesnikova went missing on Monday, witnesses saying she had been bundled into a minibus on the street in Minsk.

One of the strongest opposition speakers, she had insisted she would not leave Belarus voluntarily.

Lukashenko, in an interview with Russian media, claimed Kolesnikova and her companions “were fleeing to Ukraine” and said the guards “detained her as was required”.

“The people in the car hit the gas. And she was apparently thrown out of the car as it was moving,” he said.

He said he would not talk to the Coordination Council because he did not know the members or recognize them as opposition.

‘Russia will be next’

France’s foreign ministry condemned “the arbirary arrests” and the practice of forcing opposition leaders into exile.

Amnesty International also denounced what it called the “abduction-style arrests” and called for “an end to the campaign of intimidation and political persecution against opponents of the administration.”

But the strongman himself told television channels: “If Lukashenko collapses today the whole system would collapse and Belarus would collapse in turn.

“If Belarus falls, Russia will be next,” he added.

The Coordination Council was set up to ensure a peaceful transfer of power after Tikhanovskaya rejected Lukashenko’s claim to have won the August 9 presidential election with 80 percent of the vote.

The authorities have tried to stop the Council from working by detaining activists and forcing them to leave the country.

Kolesnikova, 38, is the only one of the trio of women who fronted Tikhanovskaya’s campaign still in Belarus.

Tikhanovskaya left the country under pressure from the authorities and was granted refuge in EU member state Lithuania. Her other campaign partner, Veronika Tsepkalo, is now in Ukraine.

Police in Belarus have been intensifying their crackdown on the opposition, with more than 600 people arrested on Sunday at the latest huge weekend protest against Lukashenko.