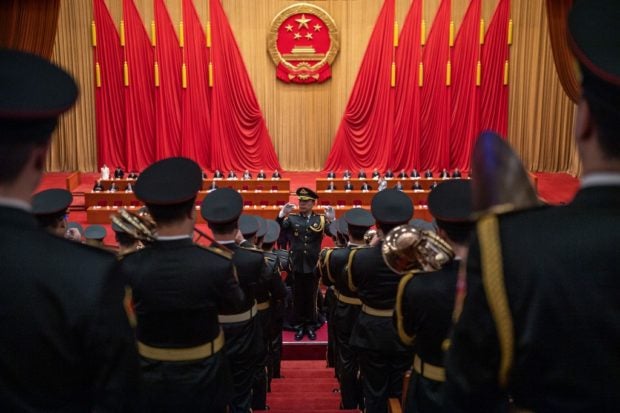 A band conductor raises his hands to start the music as Chinese President Xi Jinping arrives at the start of a ceremony to honour people who fought against the COVID-19 coronavirus pandemic, in the Great Hall of the People in Beijing on September 8, 2020. Photo by NICOLAS ASFOURI / AFP

BEIJING — China’s leaders staged a triumphant ceremony to celebrate beating the coronavirus on Tuesday as billions of people around the world still suffer the fallout from the pandemic and the global death toll nears 900,000.

The upbeat mood in Beijing comes as concerns grow about a resurgence of the virus across Europe, with France tightening restrictions, cases in Britain spiking and schools resuming around the region.

Tour de France director Christian Prudhomme has tested positive for the illness, prompting French Prime Minister Jean Castex to take a test, officials said, after the pair shared the same car to follow a stage of the cycling’s premier sporting event at the weekend.

Worldwide infections to date now stand at more than 27 million and over 890,000 people have died from the disease.

But in China the virus has been all but banished through lockdowns and travel restrictions earlier in the year that have officials touting the nation as a coronavirus success story.

President Xi Jinping said China had passed “an extraordinary and historic test” during an awards ceremony for medical professionals decorated with bugle calls and applause.

“We quickly achieved initial success in the people’s war against the coronavirus,” Xi said.

“We are leading the world in economic recovery and in the fight against Covid-19.”

The nation’s propaganda machine has been attempting to seize the narrative surrounding the pandemic, reframing the episode as an example of the agility and organisation of the Communist leadership.

Beijing is also touting progress on its vaccines as a sign of global leadership and resilience.

China put its homegrown vaccines on display for the first time at a Beijing trade fair this week and authorities hope the jabs will be approved for use by the end of the year.

The vaccines are among a handful to have entered phase 3 trials, typically the last step ahead of regulatory approval, as countries race to stub out an illness that continues to ravage large parts of the globe.

The economic fallout from the virus continues to cause havoc on economies around the world, with governments desperate to get back to normality.

India pressed ahead with reopening despite surpassing Brazil on Monday as the second-most infected nation in the world with more than 4.2 million cases.

Metro trains resumed operations earlier this week and officials said top tourist attraction the Taj Mahal would reopen on September 21, more than six months after it was shut.

South Africa announced its economy had shrunk by more than half in the second quarter, as the pandemic took its toll on Africa’s most industrialised state.

President Cyril Ramaphosa said his countrymen should use the pandemic as an opportunity.

“We will use this moment of crisis to build a new economy, and unleash South Africa’s true potential,” he said.

European countries were battling with high-profile sporting and political fallout from the pandemic on Tuesday.

France’s football team were forced to take to the field against Croatia on Tuesday — a rerun of the 2018 year’s World Cup final — without star striker Kylian Mbappe after he became the latest sports star to test positive.

The French Open tennis tournament suffered a blow after world number one and defending champion Ashleigh Barty announced she would not take part.

The Australian star said it was a “difficult” decision but the health of her family and team came first.

And in the world of politics, the European Parliament was forced to skip its regular relocation from Brussels to Strasbourg after the French city was declared a “red zone” for the virus.

EU chiefs said it was untenable that all MEPs would have to quarantine on their return to Brussels.

One of the most prominent European politicians of recent times, Italy’s ex-prime minister Silvio Berlusconi, was still in hospital suffering from the virus.

His doctor, however, was optimistic.

“All monitored parameters… are reassuring,” said Alberto Zangrillo, adding that his medical condition was in “constant favourable evolution”.