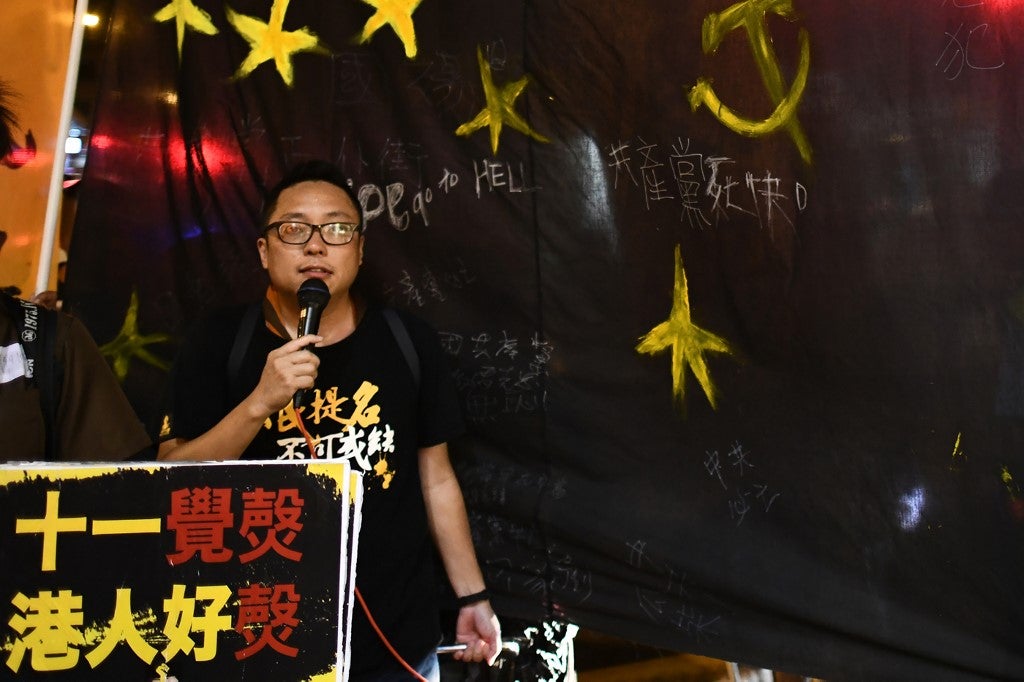 In this file photo taken on October 1, 2017, activist Tam Tak-chi walks with a black banner towards the Chinese Liaison office after an annual protest march on China’s national day, in Hong Kong. (Photo by Anthony WALLACE / AFP)

HONG KONG, China — An opposition activist was arrested in Hong Kong on Sunday by a new police squad for “uttering seditious words”, hours before a rally against a controversial security law.

The arrest of Tam Tak-chi, vice president of radical democratic party People Power, is the latest detention of a high profile democracy supporter in the financial hub and came on the morning Hongkongers had been due to vote in a general election, delayed because of the coronavirus.

An unauthorized protest in opposition to a new law that gives authorities sweeping powers — as well as the poll’s postponement and a Beijing-backed Covid-19 testing program — had more than 10,000 online subscribers.

Tam, a former radio presenter known “Fast Beat”, was arrested at his home in north east Hong Kong by police officers from the national security squad, although he was not detained under the new law, police said.

“The gentleman we arrested this morning was arrested for uttering seditious words under the Crimes Ordinance’s section ten,” senior superintendent Li Kwai-wah said, referring to legislation enacted in the British colonial era to clamp down anti-government expressions.

According to Li, Tam was held for using words that “brought into hatred and contempt of the government and raised discontent and disaffection among Hong Kong people” in speeches made across Hong Kong this summer.

“But after collection of evidence and consulting the Department of Justice, we decided that it is more suitable to use the Crimes Ordinance,” Li said.

Since the national security law was passed in Beijing and implemented in Hong Kong on 30 June, 21 people, including pro-democracy media mogul Jimmy Lai and prominent activist Agnes Chow, have been arrested for allegations of “incitement to secession”, “collusion with foreign forces” and “terrorism acts”.

Hong Kong’s administration insists the law has not impinged on the rights to freedom of speech and assembly guaranteed to the territory when it returned to Chinese rule in 1997.

Yet certain opinions and expressions in previously free-wheeling Hong Kong have become illegal, and activists have spoken of a deep chilling effect that has seen books yanked from libraries and publishers rush to amend their titles.