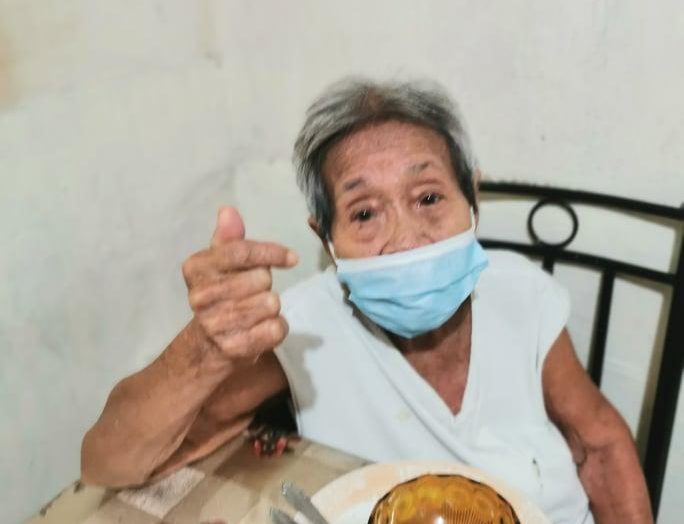 Since her son-in-law just died of the coronavirus, she and her family were tested to determine if they acquired the disease.

De Asis, who had an active life doing household chores and singing at the Bacolod Cosmopolitan Christian Church, her daughter Mildred, and grandchildren Jenmai and Melrose Joy tested positive for SARS-CoV-2, the virus that causes the coronavirus disease (COVID-19).

But instead of getting disappointed, De Asis kept herself busy and went on doing her chores at home.

“When I told her she had the virus, she just said, ‘ahhhhh’ and then chilled. During our 14-day quarantine, she did her normal routine: feeding the dogs and doing her laundry,” Jenmai said.

According to Jenmai, his grandmother could be the oldest COVID-19 survivor in the Philippines.

“We are not ashamed to share our story because this is our family’s testimony of God’s faithfulness. We are COVID survivors by God’s amazing grace,” the Manila-based tenor said.

De Asis’ son-in-law Felipe Buntalilid Jr., 75, a retired intelligence officer of the Philippine Army, succumbed to the virus on August 13.

Jenmai said that on his August 3 birthday, his father started to cough and had muscle pains.

On August 4 and 5, his father got better and no longer had a fever but was still suffering from muscle pain.

Jenmai eventually had a fever, his sister had headaches and lost her sense of smell and taste, and their mother suffered from fatigue and loss of smell.

His 96-year-old grandmother was the least affected.

On August 6 to 9, the fever of Jenmai’s father returned. The doctors told them it was pneumonia.

“We still didn’t think of COVID though we had the symptoms staring in our face,” he said.

On August 10 to 12, he said his father was responding well to pneumonia medicines and was not admitted because all hospitals in Bacolod were full.

On August 13, his father became weak and unresponsive, and they rushed him to the hospital. He died, Jenmai said.

“He was gone before we reached the hospital but we still prayed that God would revive Him. It was papa’s time. The Lord called him,” he added.

Jenmai’s father was swabbed after he passed away and the result showed that he was infected with the virus.

Jenmai said they had no idea where his father, who was diabetic, got the virus.

“Every morning, he would go to his favorite kapihan just outside the subdivision. He would also go out to buy vegetables,” he said.

“The moment we found out about our situation, we lifted our hands, told God to take control, and let Him lead,” Jenmai said.

He stressed the need for everyone to follow the health protocols and for seniors to stay indoors.

“COVID is real. It is not a joke,” Jenmai said.