Such a drag: Lockdown takes toll on ‘Golden Gays’

MANILA, Philippines — “Golden” queens are living in a shabby apartment in Pasay City, pining for the drag shows they starred in before the COVID-19 pandemic put everything on hold.

Founded in the mid-1970s, the Home for the Golden Gays shelters “indigent” elderly gay men in Metro Manila. The youngest is 59 years old and the oldest is 87.

Some of the residents were taken in by their families, but most were left wandering the streets, looking for ways to earn a living.

In time they decided to live together and put up drag shows. The activity allowed them to survive, albeit hand to mouth, from day to day.

But that’s all in the past now. “The shows are on total stop. We cannot perform because there are no venues available and mass gatherings are not allowed,” says Ramon Busa, 69, president of the Home for the Golden Gays.

Busa aka Monique dela Rue says it was “traumatizing” especially during the first two months of the enhanced community quarantine (ECQ) because the “lolas” (grandmothers), as they call themselves, have gotten used to being in the limelight.

“We could not move,” says Busa. “We could not do anything. And the worst part is we do not have income. And even if your lolas want to look for a job, we are not allowed to go out.”

When they were not being drag queens, some of the Golden Gays were makeup artists, or scavengers. But even these “trades” were suspended under the ECQ.

It is only through donations from LGBTQ groups, private companies and organizations that used to book their performances that they have managed to scrape by.

For one, a university group volunteered to pay their monthly rent from June to August, Busa says.

But what is gnawing at the lolas is their inability to perform.

Flor Bien Jr. aka Divine Amparo, who turns 60 in November, says it’s like a piece of him has been taken away. “It was disheartening. I feel jobless. Being a drag queen did not only support me and my family, it’s also part of who I am,” he says.

Bien joined the Golden Gays in 2016, but has been a “performer through and through”—living in Japan as an entertainer and winning gay beauty pageants in the early ’80s.

The same goes for Reynaldo Ramos aka Bangs Garcia, for whom performing drag is a source of strength and good health.

Ramos belongs to the category “Silver Gays,” which are group members age 50 and below.

Performing drag, says anthropologist and Inquirer columnist Michael Tan, is just one of the many activities engaged in by the LGBTQ community, “often for entertainment, but also certainly as a livelihood.” 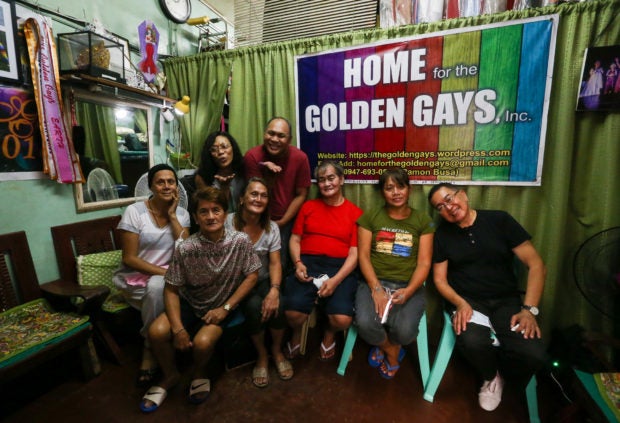 Tan says it is also a form of exercise, which is good for the Golden Gays’ physical and mental well-being.

“The dances—which involve memorizing steps and synchronizing with music—were useful in ‘exercising’ the senior citizens’ cognitive capabilities … [And] with so many months without the dancing, many of the senior citizens may have faced cognitive decline,” Tan says, citing a study by Jacqueline Dominguez, a neurologist and geriatrician who conducts dance classes for elders in urban communities.

But Busa says the Golden Gays live by their motto that getting sick is a no-no (bawal ang magkasakit). In fact, he says, they are not scared that they may be infected by the coronavirus that causes COVID-19.

“Your lolas aren’t afraid of anything,” he declares. “We don’t get scared easily about getting sick because our life expectancy is long. We know what is good for our health and we exercise.”

Moreover, Busa says, the Golden Gays are “resilient” as they are resigned to the reality that no one will help them but themselves: “You must do things beneficial to you. That’s what we always tell ourselves … We welcome challenges as something good. That’s why your lolas are survivalists.”

But in the space between “resilience” and the burden of everyday survival lies the acceptance of not having a choice.

According to Tan, Filipinos often use “resilient” to “refer to the poor, or Westerners to refer to [Filipinos], or the government to refer to citizens, and it’s more often than not a cop-out, to excuse themselves from not doing anything.”

What must be done, he says, is to provide people with resources to have “at least a fighting chance, rather than a ‘no choice’ situation.”

Aside from support in cash and in kind, what the Golden Gays need is a permanent home, Busa says.

The group has 20 active members, eight of whom are staying in the apartment on San Luis Street, their home base. The rest are in two transient houses on David and Leveriza Streets, also in Pasay.

“There’s no other place we can go to,” says Busa. “That’s why I always tell the gay millennials that we (the Golden Gays) have started this. It’s now up to them to help us continue the legacy of providing a home for elderly gay men.”

In that way, he adds, when the original Golden Gays are gone, the rest will have a place to go to, because being gay doesn’t die—“hindi naman namamatay ang kabadingan.”

There has been “zero” assistance from the government, Busa says.

He says the Home for the Golden Gays is registered at the Securities and Exchange Commission but that accreditation at the Department of Social Welfare and Development is bogged down in paperwork.

Busa is working on a new registration under the name “Golden Gays Manila.” He says once it is completed, a business process outsourcing company will provide them permanent shelter, “as promised.”

Until then, life goes on for them even in the face of discrimination.

Prejudice against elderly gay people is inevitable, Ramos says. “There are people who will underestimate you, and you cannot do anything about it. It is best to just ignore them.”

But there is more acceptance toward the LGBTQ community in today’s society, Tan points out. For example, he says, people can now casually introduce their same-sex partner—a thing that “would not have been possible maybe even five years ago.”

Still, he says, much intolerance remains, and it is “stronger against elderly gay people in part because of the stereotypes against dirty old men plus the misconception that gay men are all pedophiles.”

And there is extra prejudice for the Golden Gays because they are poor, Tan says. “No one would dare ostracize an elderly rich gay person. Our class bias is just so strong, and we see it amplified in this pandemic and the lockdown—the poor, whether women or children or LGBTQ, suffer much more.”

Mario Caberos, 68, aka Evangeline Pascual, says that when they put on their makeup and “transform,” they don’t care what other people think of them.

For Reynaldo Ravago, 68, and considered the group’s Beyoncé, performing drag brought back the artistry that society has ignored due to his age. “It is a talent no one can ever take away from me. Through drag, I became an artist again.”