Jolo bombings ‘even more horrific’ in context of pandemic – Robredo

MANILA, Philippines — The twin bombings in Jolo, Sulu, which were perpetrated on Monday, while the country was still reeling from the COVID-19 pandemic, were “inhuman” and “horrific,” Vice President Leni Robredo said.

According to the latest reports, at least 11 individuals, including several military officers, died and dozens of others were injured in the bombings.

“I grieve with the families of the lost and extend my sympathies to the injured,” Robredo said in a statement. “This attack is even more horrific in the context of the pandemic, when the imperative is to pull together to address the damage already wrought on our health, economy, and way of life.  To kill in such a manner, in these times, regardless of motivation, is inhuman.”

“I stand with our soldiers and the men and women of our uniformed services as well as with the people of Jolo, and call on government to do all that it can to bring those behind this act of terror to justice,” she added. 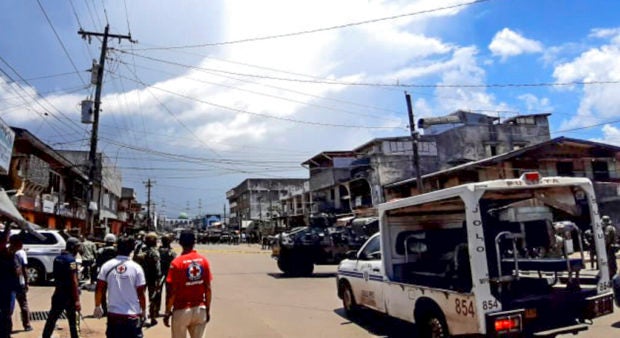 In this photo provided by the Philippine Red Cross, troopers secure an area after explosions struck the town of Jolo, Sulu province southern Philippines on Monday Aug. 24, 2020. Bombs exploded in a southern Philippine town Monday, killing several soldiers and wounding other military personnel and civilians despite extra tight security because of threats from Abu Sayyaf militants. (Philippine National Red Cross via AP)

According to the commander of the Western Mindanao Command (Westmincom), Maj. Gen. Corleto Vinluan Jr., at least five soldiers and 16 civilians were wounded in the first explosion, which occurred 11:54 a.m. of Monday morning near a computer shop in Jolo’s Barangay Walled City where a military truck was parked.

Another explosion occurred an hour later, around a hundred meters away from the site.

The United Nations also issued a statement on the bombings, saying: “The United Nations (UN) in the Philippines, led by Resident Coordinator Gustavo Gonzalez, has strongly condemned the attack today on Jolo, with preliminary reports of at least 11 people killed and over 70 wounded.”

“The UN stressed that attacks against civilians are always unacceptable and called on perpetrators to be held accountable,” it added.