MANILA, Philippines — The police officers involved in the fatal shooting of four Army intelligence officers in Jolo, Sulu may have had connections with the two suicide bombers being tailed by the military men in their operation.

Armed Forces of the Philippines (AFP) Western Mindanao Command chief Maj. Gen. Corleto Vinluan Jr. raised this possibility as a motive behind the shooting of the four military officers, who were in the midst of an anti-terrorism operation, when they were gunned down last June 29.

It was Senate Minority Leader Franklin Drilon who asked Vinluan, during a confirmation hearing of a Commission on Appointments’ panel on Monday, regarding possible motives behind the shooting of the four Army men.

The military officers who were killed were dispatched by the Joint Intelligence Task Group and the Task Force Sulu after technical intelligence detected the possible location of two female suicide bombers and the maker of their suicide vests.

Drilon asked Vinluan whether there is truth to the “conspiracy” that the cops knew the two suicide bombers being hunted down by the Army officers.

In response, the military official said it was a possibility.

Pressed by Drilon if he could identify who among the nine officials are supposedly connected to with the suicide bombers, Vinluan said he could not give a “definite” answer yet. 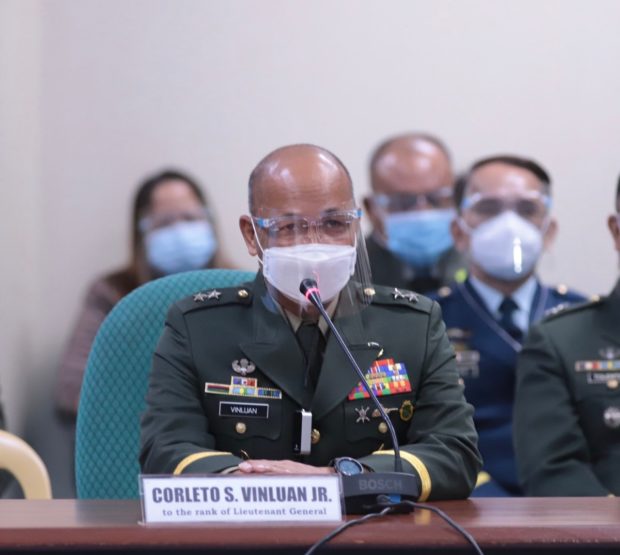 Commission on Appointments hearing: Newly-installed Western Mindanao Command chief Maj. Gen. Corleto Vinluan Jr. answers queries from Senate Minority Leader Franklin Drilon during the Commission on Appointment’s National Defense Committee deliberations Monday, August 24, 2020, on the updates in the investigation on the killing of four Army soldiers by nine policemen in Jolo, Sulu. Vinluan was the commander of the 11th Infantry Division of the Philippine Army based in Sulu when the fatal shooting of four Army intelligence operatives happened. (Henzberg Austria/Senate PRIB)

Based on investigation, the four military intelligence officers were shot dead near the Jolo police station in Sulu.

The Army officers had identified themselves to the policemen but were still shot by the policemen when one of the officers alighted, unarmed, from the sports utility vehicle (SUV) they were riding in.

The police, however, offered a different version of what happened.

The Sulu police force claimed that its men stopped the SUV carrying the intelligence officers and instructed them to proceed to a nearby police station for verification of identities.

According to the PNP, the SUV sped off as both forces neared the Jolo police station, which triggered a car chase. Police said they only defended themselves as the soldiers opened fire.

But the initial investigation of the National Bureau of Investigation (NBI) showed that the police officers simultaneously attacked the Army Intelligence officers without “the opportunity to defend themselves.”

The NBI has already filed a murder complaint against the nine police officers for the death of the four intelligence officers.

Meanwhile, Senator Panfilo Lacson expressed hope that the tragic incident will “not drive any wedge” between the Philippine National Police (PNP) and the AFP.

“I would just like to state that I sincerely hope that whatever animosity was created by the unfortunate incident will be limited under your area of jurisdiction and to that particular incident; and would not drive any wedge between the PNP and AFP as institutions. I do hope that your efforts should follow that line,” Lacson said.