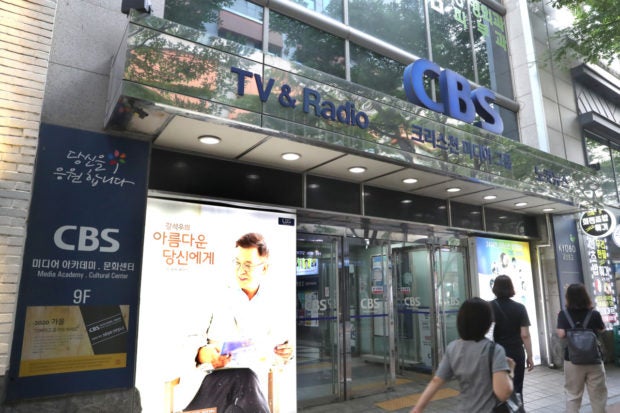 The CBS building on Wednesday morning after a reporter was diagnosed with COVID-19 on Tuesday. Yonhap via The Korea Herald/Asia News Network

SEOUL — The broadcast and political worlds are on heightened alert after a reporter for local radio broadcaster Christian Broadcasting System, who appeared on the same CBS radio program as Democratic Party leadership contender Rep. Lee Nak-yon on Monday morning, tested positive for COVID-19 on Tuesday.

Rep. Lee, the former prime minister and a leading presidential candidate, immediately canceled all scheduled activities upon learning of the development and went into quarantine after being tested Tuesday night. On Monday morning, he announced that he had been confirmed negative and said that he would discuss his future activities with his party and the National Assembly.

CBS has canceled its regular radio programming, making it the first case of a shutdown of a major broadcaster due to COVID-19, and has replaced it with a music broadcast. Pre-recorded TV programs also replaced regular live broadcasts for 24 hours starting 6 a.m. Wednesday. CBS runs a radio station and a television station.

”Kim Hyun-jung’s News Show,“ the radio program in question, is one of the most popular shows on CBS. Rep. Lee appeared on the live talk show after the CBS reporter and used the same chair and microphone.

“The floor that we used for the radio program was sanitized yesterday, but our workers are all in quarantine today just in case,” said a CBS official. “We are keeping a watch as to whether additional people test positive.”

The other Democratic Party leadership contenders Rep. Park Joo-min and Rep. Kim Bu-gyeom also had a discussion with Rep. Lee on another CBS radio program on Monday night, which led the two lawmakers to cancel their planned events on Wednesday in order to wait until Lee’s results were released.

With many people working in an enclosed space, the broadcast industry is especially vulnerable to COVID-19. Press rooms have been closed in multiple facilities on several occasions after reporters, who interview a wide range of people, came in contact with people who tested positive.

Earlier this month, a KBS reporter was tested for COVID-19 after riding on an elevator with right-wing pastor Jun Gwang-hoon before he was confirmed with COVID-19. Also, an MBC driver tested positive this week, leading to the staff who had been in the car needing to get tested.