US bombers conduct drill over Korean Peninsula in show of force 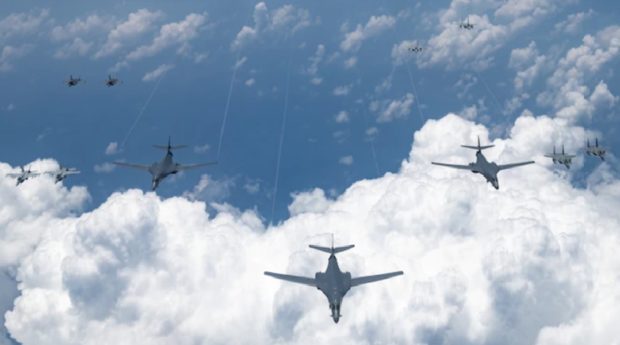 SEOUL — Several US bombers flew over the Korean Peninsula and over waters between Korea and Japan on Monday in a show of force, it was revealed Wednesday.

The US military’s deployment of four B-1B Lancers and two B-2 Spirit Stealth Bombers to the region came just a day before South Korea and the US kicked off their annual joint military drills Tuesday.

Scheduled to run through Aug. 28 this year, the drills are held annually to deter North Korea’s aggression, but are now scaled down, without mobilizing key US-based troops due to coronavirus concerns.

In a clear show of force against North Korea and its main supporter China, the Lancers reportedly flew from Andersen Air Force Base on Guam and Dyess Air Force Base in Texas, joined by the Spirits traveling from Diego Garcia Air Base in the Indian Ocean.

The August drills carry exceptional weight this year because Seoul hoped to test stage two of a three-phase plan to take over wartime operational control from Washington, for the first time since the 1950-53 Korean War.

But Seoul’s plan went awry as US reserve forces who play a key part in testing the scheme had to skip the drills over coronavirus worries.

If the program had gone as planned, Seoul and Washington would have tested stage two this month and would complete the final stage in 2021, to wrap up the program by 2022, as President Moon Jae-in previously pledged to do so before he leaves office in May that year.

Unlike the South in favor of testing the handover program, the US had reportedly been pressing hard on forging ahead with the regular drills, saying they had already missed out on the full-scale drills in March due to COVID-19.

Some local experts have been wholly skeptical as to whether Seoul could even be ready to take over the wartime role from Washington by 2022.

“Our reconnaissance capability still lags far behind. I’m not sure whether Americans would see it fit to hand over their command to us,” said one military expert.

South Korea heavily relies on the US for North Korea intelligence gathered from its spy satellites. South Korea’s military is seeking to expand its intelligence satellites by the time of the wartime role transfer, but that ambition has largely invited doubts.