Stranded in Metro Manila, families despair to return to their roots | Inquirer News

Stranded in Metro Manila, families despair to return to their roots 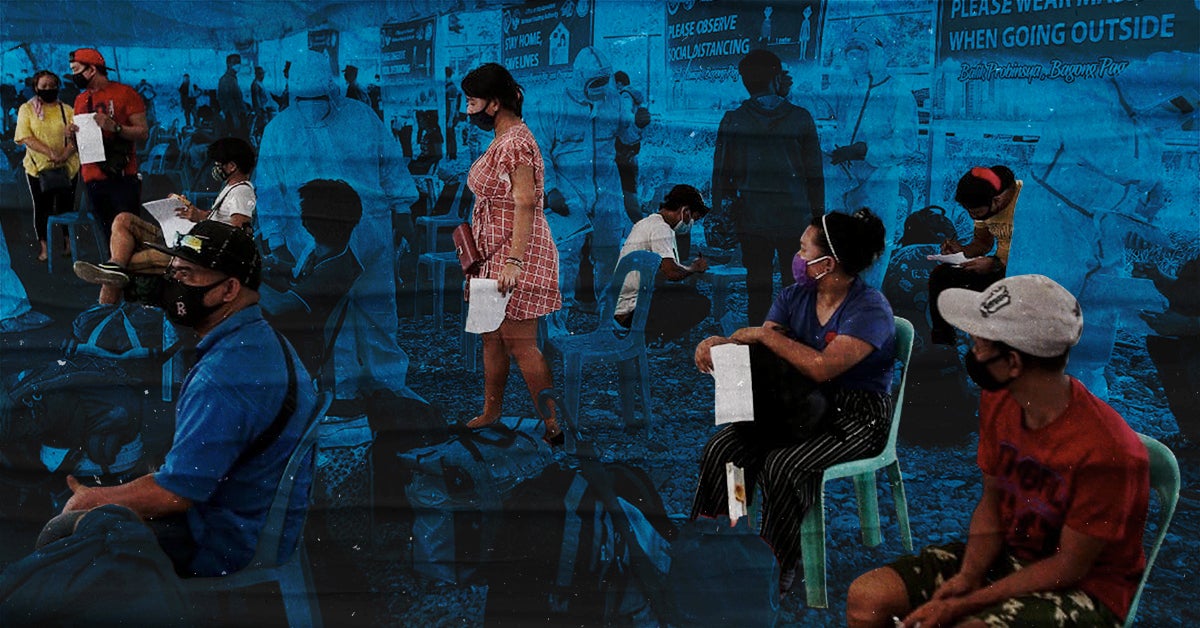 A man in Makati City has resorted to locking his home’s front door to prevent his children from taking a peek or going outside.

It pains him to see food pass by the street where he and his family live knowing he can’t afford them. Every day, vendors selling snacks and meals line the street across his apartment, reminding him of what he can’t have.

(It’s painful for me because the house we’re staying at has a lot of vendors in front selling food, snacks. My children would keep looking at the food, but we don’t have any money to buy these. The door is locked so the children can’t go out. If they’re outside, they’ll look at the food, but have no money to buy).

(My youngest told me, [before] we would eat three times a day. Now, we eat once a day, with no viand. I explained to him that there’s a lockdown. I no longer have a job, we do not have money anymore).

The man had left his life as a farmer in Siayan, Zamboanga del Norte, where he planted rice and corn in the fields for a living. He came to Metro Manila in 2016 to work as a mason in a construction company and, two years later, was joined by his wife and four children.

Like many Filipinos who migrated from the province, they came to Metro Manila in search of a better life. For a few years the dream came true, but is now slowly disappearing in the uncertainty of the future brought by the COVID-19 pandemic.

The man lost his job when his employer no longer allowed him to report for work amid the implementation of enhanced community quarantine (ECQ) to fight the spread of coronavirus.

Without a job, he and his family tried to live on what was left of their savings as long as they could but the funds had run out by June. They are now three months behind on rent and have been relying on the kindness of neighbors for rice to make lugaw or porridge. On his last trip to the village hall to ask for rice, he came home empty handed.

Returning to the province now seems to be the only recourse, compelling the man and his family to apply for the Balik Probinsya program last May in the hopes of an immediate return to Mindanao.

The Balik Probinsya program, which was institutionalized by President Rodrigo Duterte in May under Executive Order No. 114, aims to reverse migration to the National Capital Region and other congested urban areas by helping low-income families in Metro Manila to resettle in their provinces.

Inter-agency assistance is provided to beneficiaries of the program to ensure efficient voluntary movement, including transportation, relocation, transitory support, livelihood and employment packages, and educational programs, among others.

But as locally-stranded individuals continued to grow by the hordes due to the COVID-19 pandemic, the government suspended the Balik Probinsya program in June to give way for the Hatid Tulong program — a COVID-19 initiative to transport those stranded in Manila due to travel restrictions back to their provinces.

Down to the last P50

Alfe and her husband arrived in Metro Manila with their 5-year-old and 1-year-old sons last March 13 to look for a job and carve a new life. The family traveled all the way from Dipolog City, Zamboanga del Norte, and was unaware there would be a lockdown in the metropolis three days later.

Before coming to Metro Manila, Alfe worked as a beauty advisor for a cosmetics brand in a Watsons store while her husband worked as a driver. Their ill-timed arrival, however, has kept them stuck in Quezon City for five months now, with no job to sustain their family. And their landlord, determined to see them out of the apartment within the week due to their failure to pay rent, cut off their water supply last week.

(We went around Quezon City just looking for a job, but we couldn’t find any, not even as a housekeeper. We will be kicked out from the place we are renting soon, we don’t have any more food… My child no longer has milk and diaper, what’s left of our money is just P50).

Sometimes, when they could, Alfe’s parents would send P500 her way just so she can buy milk for her 1-year-old. Other times, she and her husband would turn to neighbors for the little they could offer in food.

Alfe said they applied for the Balik Probinsya program last May so they can go back to Dipolog, but are now left in waiting due to the program’s suspension. She added that they tried to ask for help from the barangay, but the barangay had nothing more to give them and advised them to go to the Quezon City Hall instead. They also attempted to go to the Department of Social Welfare and Development, but were given the runaround as well.

(We went to the City Hall, then they told us to go to DSWD in Batasan. My husband went there and they told him to go to Quiapo where the DSWD-NCR office is. We did not go there anymore since it is already too far and we have children with us. We got scared we might get infected and be sick by the time we got home).

The sight of thousands of Filipinos crammed inside the Rizal Memorial stadium around the end of July drew flak and rage from critics, prompting Malacañang to admit its shortcomings in the way the individuals awaiting transportation for the Hatid Tulong program was handled. Some of the individuals were shown not wearing masks and not practicing physical distancing measures. Others were also photographed sleeping on the steps of the stadium next to their luggage.

At the time, Assistant Secretary Joseph Encabo, of the Presidential Management Staff and lead enforcer of the Hatid Tulong program, sought for understanding and explained this batch of stranded persons were brought to the stadium so they would not have to wait out in the streets, adding that among the travelers were pregnant women, senior citizens and young children.

Interior Secretary Eduardo Año, on the other hand, said that a lot of the stranded individuals wanted to avail themselves of the program and were “stubborn” for fear that they might not be accommodated in the free transport program.

Interior Undersecretary Jonathan Malaya, in an interview with Inquirer on Aug. 11, said there would no longer be grand sendoffs for stranded individuals in the Hatid Tulong program to avoid what happened back in July. He added that many of those who went to the stadium were unregistered for the program and went there when they heard there was such a service to bring home those who were stranded.

(What we’ll be doing now are pocket sendoffs so we’ll group, for example, those on the way to Ilocos, then we’ll see them off, then those on the way, perhaps, to Davao, Zamboanga).

Meanwhile, when asked about the Balik Probinsya program, Malaya said the government has not rolled the program out completely since the COVID-19 situation in some provinces are still not under control. For now, they have just been preparing, collecting information and processing applications for the program.

“The moment you start moving these people, eto na naman yung (here again is the) issue of uncontrolled movement ng people, andyan na naman yung issue na baka nagdadala ng sakit sa mga probinsya (you have again the issue that these people might be bringing disease in the provinces). So in response to that, hindi pa tayo makapag-full blast (we can’t go full-blast yet)” he said.

Regarding funds allocated for the Balik Probinsya and Hatid Tulong programs, Malaya clarified there is no specific budget for these since these are not in the General Appropriations Act.

Vehicles used in transporting individuals, for example, are accounted for by the Department of Transportation, whereas expenses for PCR tests and quarantine costs in the provinces are borne by the local government units. The small assistance given to the passengers, meanwhile, are from the DSWD.

(He did not allocate any budget per se, as if the President said, this is what we’ll use, no. What happened there is every agency, according to their own mandate, would just utilize their people who are already on government payroll and use the funds reserved in their budget as approved by Congress and in accordance to their mandate).

The same goes for the Balik Probinsya program. Its pabahay, or shelter, budget would be taken from the National Housing Authority, for example, whereas livelihood packages would be accounted for by the Department of Labor and Employment, said Malaya.

With the reversion of Metro Manila, Bulacan, Laguna, Rizal and Cavite to modified enhanced community quarantine (MECQ) from Aug. 4 to Aug. 18, sendoffs for stranded individuals are also on hold.

Individuals seeking to return to the provinces have no choice but to wait until the MECQ is once again lifted (for Hatid Tulong beneficiaries) or to wait until September, for those who applied for the Balik Probinsya program.

Malaya said this is “not the best situation,” but Filipinos are used to this anyway.

“Pilipino naman tayo noh, sanay naman tayo sa ganito (we’re Filipinos, we are used to this), we will get through this,” he said. “We just have to be patient and we just have to do what we need to do. Exercise individual responsibility and find ways and means to help the country go through this pandemic.”

As for Alfe, what is important is she and her family get to return to the province. Whatever happens after, then, seems to be the farthest thing from her mind.

(We still don’t know yet. What’s important is we will all be safe. Should we not have any jobs yet, we have parents there who will feed us for the meantime and we won’t have to rent a house).

The same goes for the father in Makati City as he and his family long for home.

(There won’t be a problem anymore as long as we get to go home to the province. We’ll just look for a new job there).