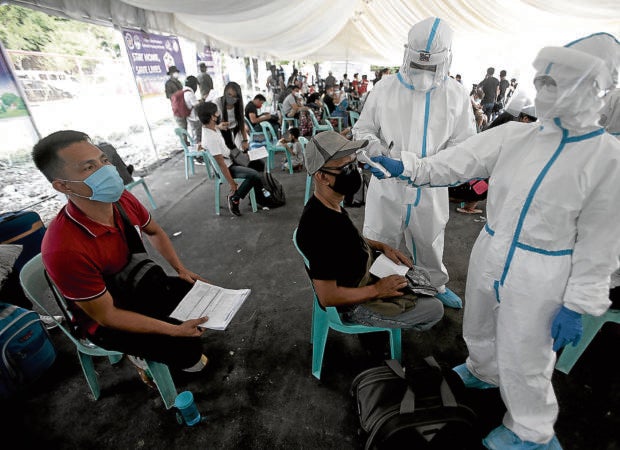 BACK TO THE PROVINCE Workers and families returning to their home province of Leyte under the government’s “Balik Probinsya” program undergo a final health check in a holding area in Quezon City before boarding their buses. —RICHARD A. REYES

DAGUPAN CITY, Pangasinan, Philippines — To encou­rage workers to stay in their provinces after leaving Metro Manila through the “Balik Pro­binsya” program, all regions must have a uniform minimum wage that could match the rate in Metro Manila, according to a proposal from two northern Luzon lawmakers.

These are significantly higher than the P295 minimum pay for nonagriculture work in the Ilocos region, for example, and the P282 minimum salary for plantation work there.

In regions outside of Metro Manila, the minimum daily wage rate ranges from P282 to P420 (nonagriculture), P294 to P394 (agriculture, plantation) and P282 to P394 (agriculture, nonplantation), data from the National Wages and Productivity Commission (NWPC) showed.“This is highly problematic since the retail prices of our basic necessities and prime commodities are the same across regions. As an example, the price of a brand of corned beef is set at P26.50 regardless of whether you are in an urban or rural area,” the lawmakers said in the bill’s briefing material. Since laborers in rural areas have less to spend for the same cost of living as those in urban areas, the measure says, “these difficult situations force our laborers to migrate to cities for better opportunities.”

The Balik Probinsya program was initiated during the quarantine due to prevailing assessment that the overpopulation of Metro Manila was one of the main reasons the new coronavirus disease (COVID-19) spread so quickly in the capital region. Metro Manila is the epicenter of COVID-19, which had infected 9,234 of its residents as of Monday.

Guico said the lack of job opportunities in the provinces had prompted workers to flock to Metro Manila and other me­gacities where higher-paying jobs are available.

“Basically, if there are only enough opportunities in the provinces for our laborers, they need not leave their hometowns to seek a brighter future in major cities,” Guico said.

Uniform wages will boost development, improve social services, and promote full employment and industrialization in towns and cities outside Metro Manila, he said.

Aside from setting a common base pay for all regions, the bill seeks to abolish the Regional Tripartite Wages and Productivity Board, which sets wage ceilings according to the demands of each cluster of provinces.

The measure also directs the NWPC to adjust the general minimum wage rate every three years.

“More than providing labo­rers with better opportunities, we are giving them a choice, which they currently don’t have. We have to veer away from the mindset that rural areas are mere provinces; instead, we have to look at their potential and [fulfill] them,” the lawmakers said.