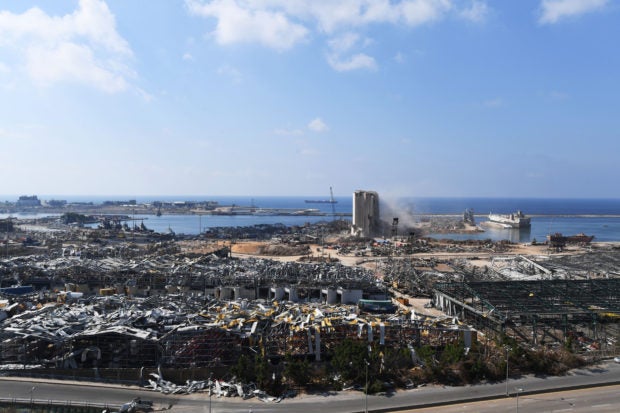 This picture shows a view of Beirut’s port in the aftermath of a huge chemical explosion that disfigured the Lebanese capital, on August 14, 2020. (Photo by – / AFP)

The August 4 explosion that killed more than 170 people and ravaged swathes of Beirut has ignited calls at home and abroad for political change in a country already gripped by a crippling economic crisis before the blast dealt another devastating blow.

Prime Minister Hassan Diab’s cabinet resigned on Monday over the explosion, widely blamed on negligence and corruption by the country’s ruling class.

Politics in multi-confessional Lebanon is dominated by former warlords from the 1975-1990 civil war who have exchanged their military fatigues for suits, or were replaced by relatives.

In his second speech since the blast, Nasrallah dismissed the idea of a “neutral government” as a “waste of time” for a country where power and influence are distributed according to religious sects.

“We don’t believe there are neutral (candidates) in Lebanon for us to form a (neutral) government,” Nasrallah said.

Instead, the Hezbollah chief called for a government model that has endured for years, despite prolonged political and economic crises and demands for change.

“We are calling for attempts to form a national unity government, and if that is not possible, then a government that secures the widest representation possible for politicians and experts,” Nasrallah said.

A government that does not have the backing of the country’s top political blocs “either falls, or collapses, or is toppled in parliament at any given cross roads”, Nasrallah said.

The explosion at Beirut’s port happened when a huge stock of hazardous materials stored in a warehouse in the heart of the capital for years exploded, despite repeated warnings of the dangers it posed.

The explosion revived a street protest movement that had first erupted in October last year against government corruption and a lingering economic crisis.

Months of demonstrations that started last autumn led to the resignation of the government and installation of Diab at the head of a new cabinet dominated by Hezbollah and its allies.

The Iran-backed Shiite movement also controls the majority in parliament with its allies.

Protesters filled the streets again and clashed with security forces in the days after the explosion, blaming their political leaders for the negligence they say led to the disaster.

Western powers have pressed Lebanon’s leaders for deep-seated change and a government that reflects the will of the people, and also insisted reforms be implemented to unlock billions of dollars in international aid.