President Rodrigo Duterte has ordered a nearly two-month postponement of the opening of classes in consideration of the continuing spread of the coronavirus and the appeals of many teachers and parents who wanted more time to adequately prepare for outside classroom learning.

In a memorandum on Friday, Executive Secretary Salvador Medialdea informed Education Secretary Leonor Briones that the school opening scheduled for Aug. 24 was to be deferred to Oct. 5.

The memo said this was the instruction of the President “upon the recommendation” of the Department of Education (DepEd) itself.

“The DepEd is hereby instructed to ensure that all preparations have been made for the smooth and successful virtual opening of classes for Academic Year 2020-2021,” it said.

Briones said the DepEd was prepared for opening classes this month or in September “but the President chose October.”

“His consideration is COVID-19 and the health situation. And hopefully by October, there is a glimmer of hope already and improvement (in the control of the level of infection),” she said. 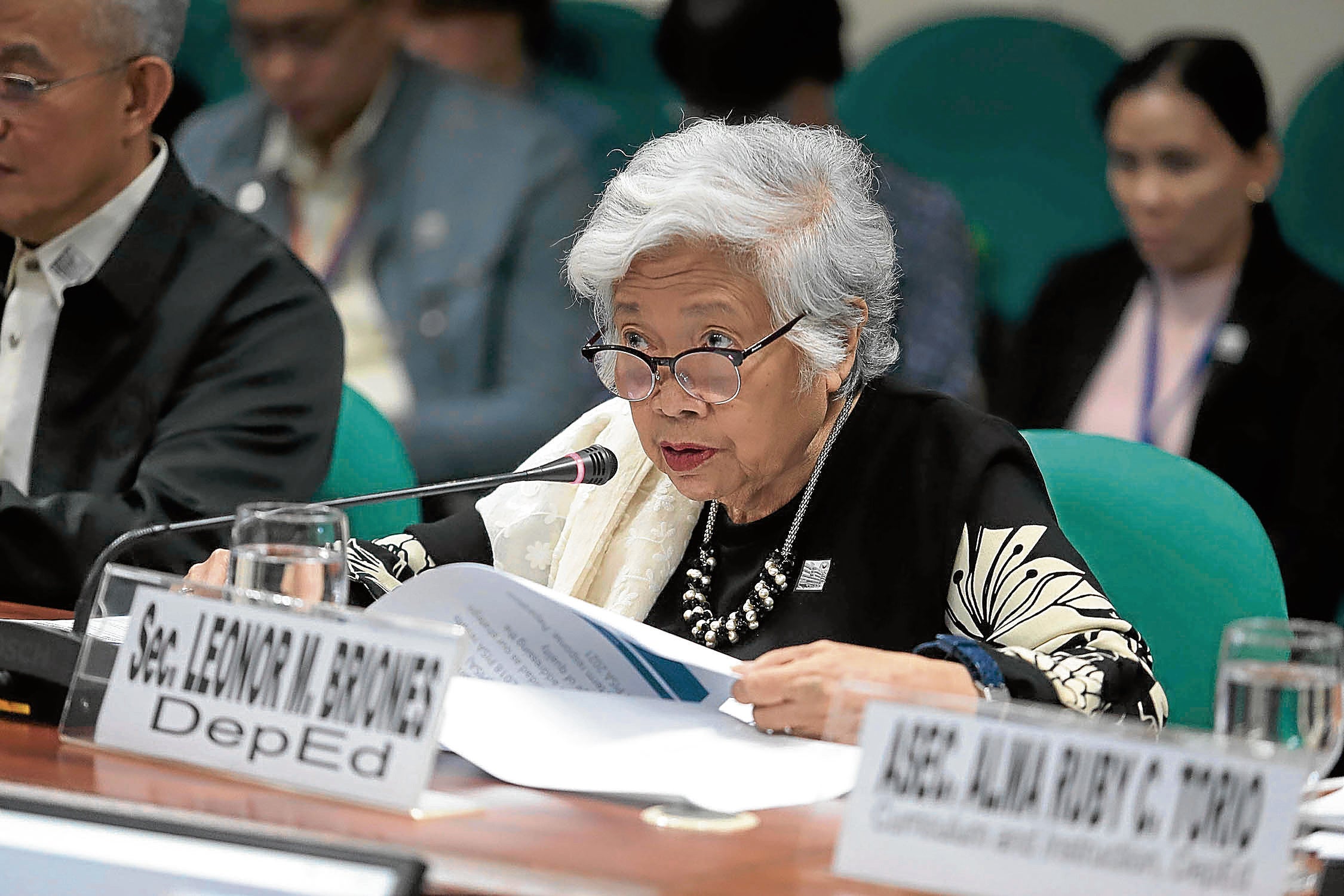 “We relayed all the implications to the President. He made a choice and, for him, the most important is to keep the children and students absolutely safe,” she added.

She said the postponement would affect both private and public elementary and high schools, but those that had already started classes may continue.

A DepEd table on the operation of private schools for the school year 2020-2021 showed that 1,277 private schools, including 243 in Metro Manila, have already started classes.

Briones said the class opening postponement would mean moving the date for closing schools, but she did not say when that would be. She said this would have to take into account local and national holidays and days for possible make-up classes.

Senators Bong Go, the President’s longtime aide, and Sherwin Gatchalian, chair of the Senate basic education committee, were among those who suggested moving the school opening to October to give teachers more time to prepare for the shift to blended and distance learning.

“We all want to ensure that students will all have a fair chance to complete their education regardless of their state in life,” Go said.

“As I have said, we don’t want to compromise their studies. We just want to make sure that the (new learning system) will be implemented appropriately without adding burden to the people. We will prioritize the lives and interests of the Filipinos,” he said.

Gatchalian said the postponement was “the most prudent course of action.”

“This is a tough decision to make, but the safety of our teachers, learners, personnel, and their families should be our utmost priority,” he said in a statement.

The President’s directive was based on Republic Act No. 11480, which gave him the authority to reset the start of the school year during a state of emergency or calamity. The law states that the school year shall begin on the first Monday of June but not later than the last day of August in normal times.

The President has repeatedly said he would not allow in-person classes unless a vaccine for SARS-CoV-2, the virus that causes COVID-19, or a cure for the disease was available. That had prompted the DepEd to devise the blended learning modes of instruction.

However, parents, students, and other sectors raised concerns about the exclusivity of the blended learning methods that rely on computers, electronic gadgets, and stable internet connections.

The DepEd said it would distribute printed modules or study materials to students without access to gadgets and develop lessons for airing on TV and radio stations. 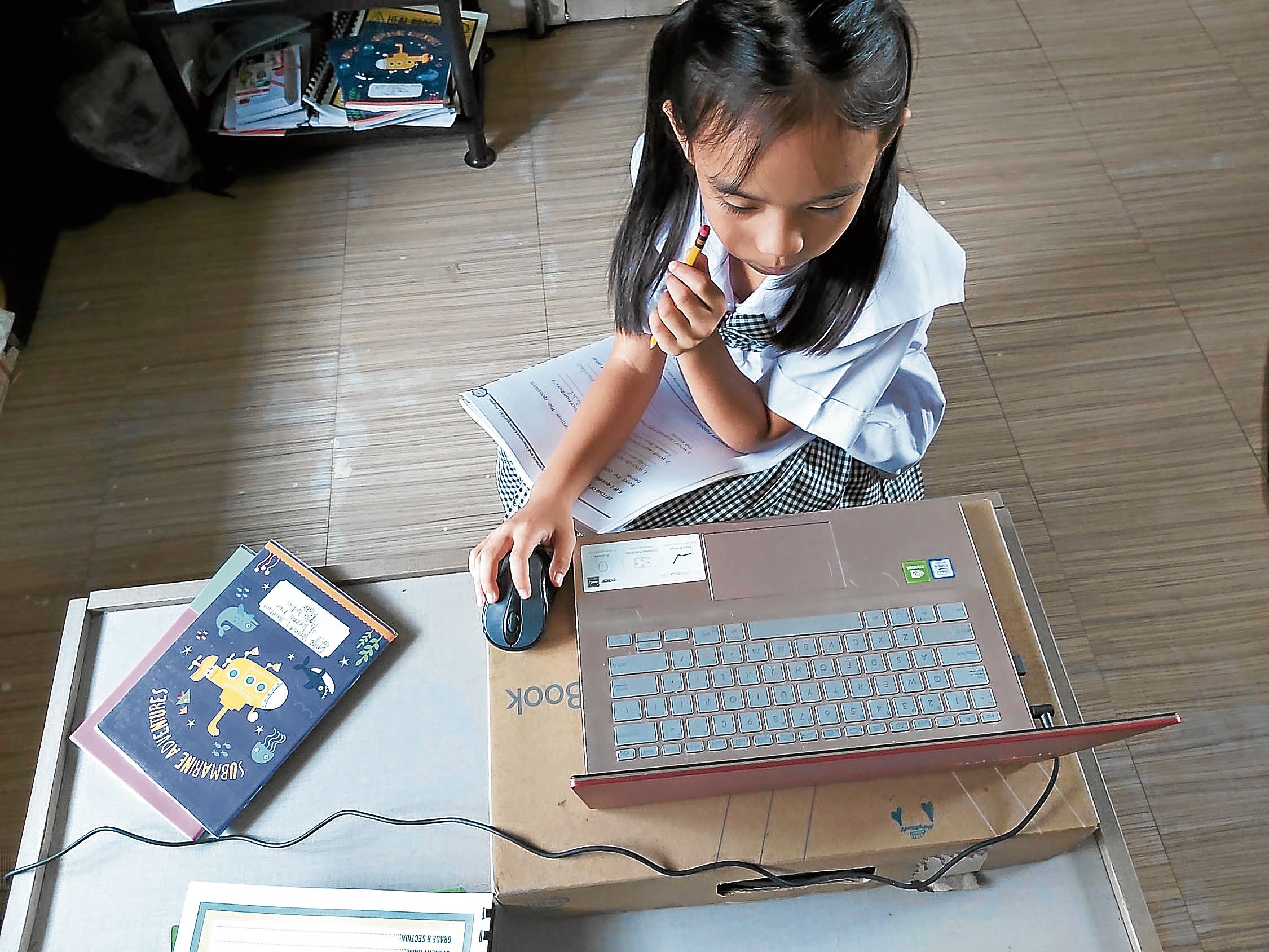 LEARN FROM HOME This second grader, in uniform and hair neatly combed, attends online classes using a laptop in this photo taken on Aug. 10 at her home in Calamba, Laguna, more than 40 kilometers from her school in Makati City. —CHRIS QUINTANA

Briones said the scheduled opening of classes had been fixed and set for Aug 24, but one consideration for the postponement was the request of Region IV division of schools to move it to Sept. 7. The National Capital Region (NCR) division of schools also requested starting the school year in the third week of September, she said.

Regions IV-A (Cavite, Laguna, Batangas, Rizal, and Quezon) and NCR are just two regions but they have large populations and are industrial hubs.

Briones pointed out that half of the NCR schools accounting for around 17,000 classrooms would be used as isolation facilities.

Several senators earlier called for a postponement after NCR and several nearby provinces were placed under the modified enhanced community quarantine.

They also noted that some schools have acquired less than 50 percent of the distance learning modules from DepEd, which Briones had acknowledged.

“By October, there is no excuse that we will not be ready. We are already psyching ourselves up to be ready by Aug 24; we should be more than ready (by) Oct. 5,” Briones said.

Use time to adjust

Gatchalian said education officials should make use of the remaining time to make the necessary adjustments in the implementation of the Basic Education Learning Continuity Plan and to reach out to some 4 million students who may not be able to enroll this school year.

“These include the completion of self-learning modules, improving our radio and television-based education programs, and other alternative learning modalities,” Gatchalian said.

“Another crucial point I would like to emphasize is to give teachers assurance in terms of their welfare and health-care needs, especially if they fall ill to the coronavirus,” he said.

ACT Teachers party-list Rep. France Castro said DepEd must use the time before the opening in October to “comprehensively study and implement concrete plans for the safe and quality reopening of schools that will be accessible by every child.”

“[DepEd must] provide adequate funds for personal protective equipment and transportation to teachers delivering modules and ensure enough modules are printed for every student in the distance self-learning modules,” Castro said.

DepEd has yet to release the official number of teachers who have contracted the virus. It said the minimum health standards would be in place by the Oct. 5 school opening.

Citing her group’s count, Castro said there were at least 100 teachers who contracted the ailment in NCR, 13 in Region IV-A, 21 in Region VII and one each in Regions X and II. —WITH A REPORT FROM MARLON RAMOS AND MELVIN GASCON