Who owned the chemicals that blew up Beirut? No one will say 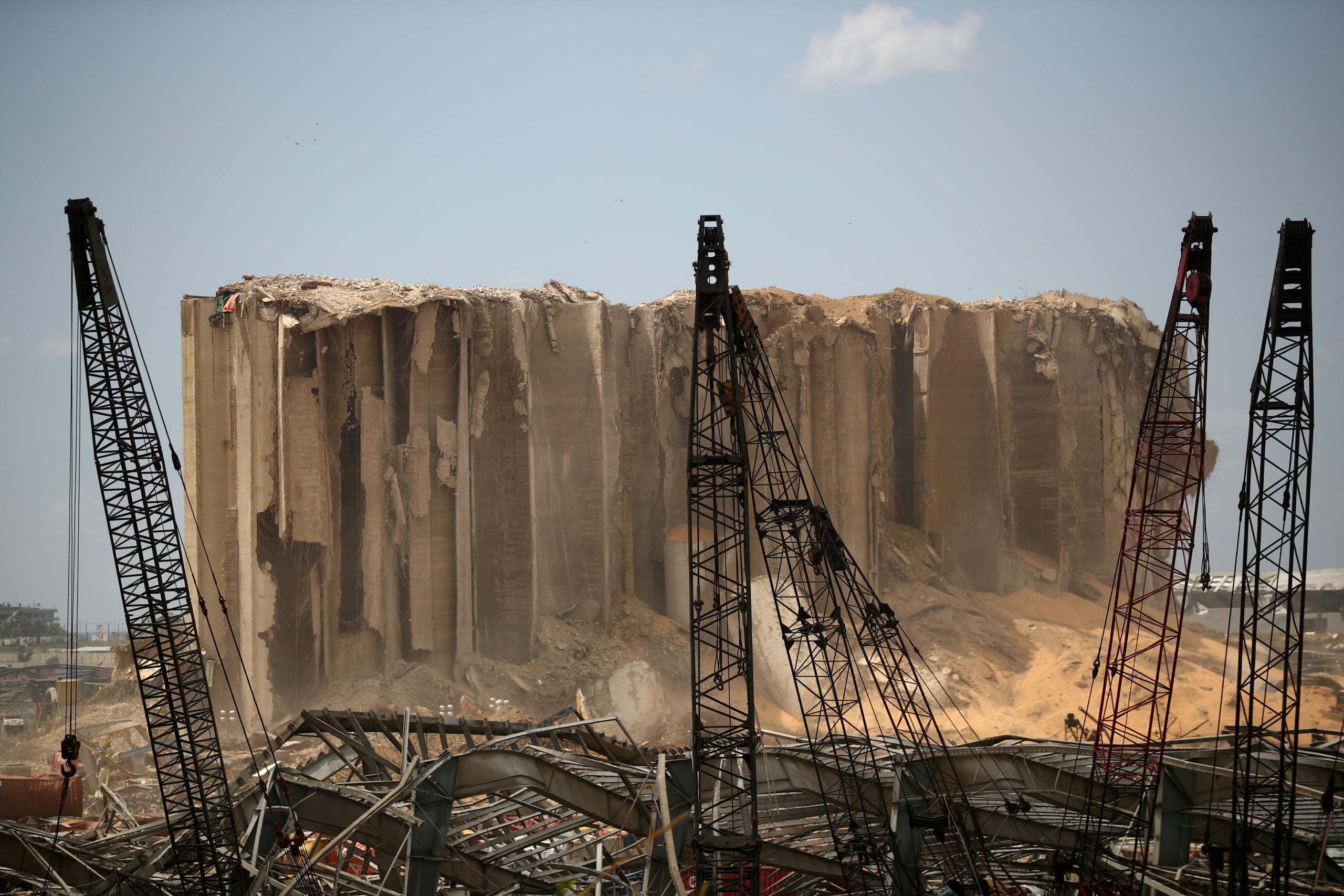 FILE PHOTO: Debris are seen in the port area after a blast in Beirut, Lebanon, August 10, 2020. REUTERS/Hannah McKay/File Photo

MOSCOW/DUBAI/LONDON–In the murky story of how a cache of highly explosive ammonium nitrate ended up on the Beirut waterfront, one thing is clear — no one has ever publicly come forward to claim it.

There are many unanswered questions surrounding last week’s huge, deadly blast in the Lebanese capital, but ownership should be among the easiest to resolve.

Clear identification of ownership, especially of a cargo as dangerous as that carried by the Moldovan-flagged Rhosus when it sailed into Beirut seven years ago, is fundamental to shipping, the key to insuring it and settling disputes that often arise.

But Reuters interviews and trawls for documents across 10 countries in search of the original ownership of this 2,750-tonne consignment instead revealed an intricate tale of missing documentation, secrecy and a web of small, obscure companies that span the globe.

“Goods were being transported from one country to another, and they ended up in a third country with nobody owning the goods. Why did they end up here?” said Ghassan Hasbani, a former Lebanese deputy prime minister and opposition figure.

Those linked to the shipment and interviewed by Reuters all denied knowledge of the cargo’s original owner or declined to answer the question. Those who said they didn’t know included the ship’s captain, the Georgian fertilizer maker who produced the cargo and the African firm that ordered it but said it never paid for it.

The official version of the Rhosus’ final journey depicts its voyage as a series of unfortunate events.

Shipping records show the ship loaded ammonium nitrate in Georgia in September 2013 and was meant to deliver it to an explosives maker in Mozambique. But before leaving the Mediterranean, the captain and two crew members say they were instructed by the Russian businessman they regarded as the ship’s de facto owner, Igor Grechushkin, to make an unscheduled stop in Beirut and take on extra cargo.

The Rhosus arrived in Beirut in November but never left, becoming tangled in a legal dispute over unpaid port fees and ship defects. Creditors accused the ship’s legal owner, listed as a Panama-based firm, of abandoning the vessel and the cargo was later unloaded and put in a dockside warehouse, according to official accounts.

The Beirut law firm that acted for creditors, Baroudi & Associates, did not respond to requests to identify the cargo’s original legal owner. Reuters was unable to contact Grechushkin.

The empty ship eventually sank where it was moored in 2018, according to Lebanese customs.

The Rhosus’ final movements are under fresh scrutiny after the ammonium nitrate caught fire inside the warehouse and exploded last week, killing at least 158 people, injuring thousands and leaving 250,000 people homeless.

Among the still-unanswered questions: who paid for the ammonium nitrate and did they ever seek to reclaim the cargo when the Rhosus was impounded? And if not, why not?

The cargo, packaged in large white sacks, was worth around $700,000 at 2013 prices, according to an industry source. 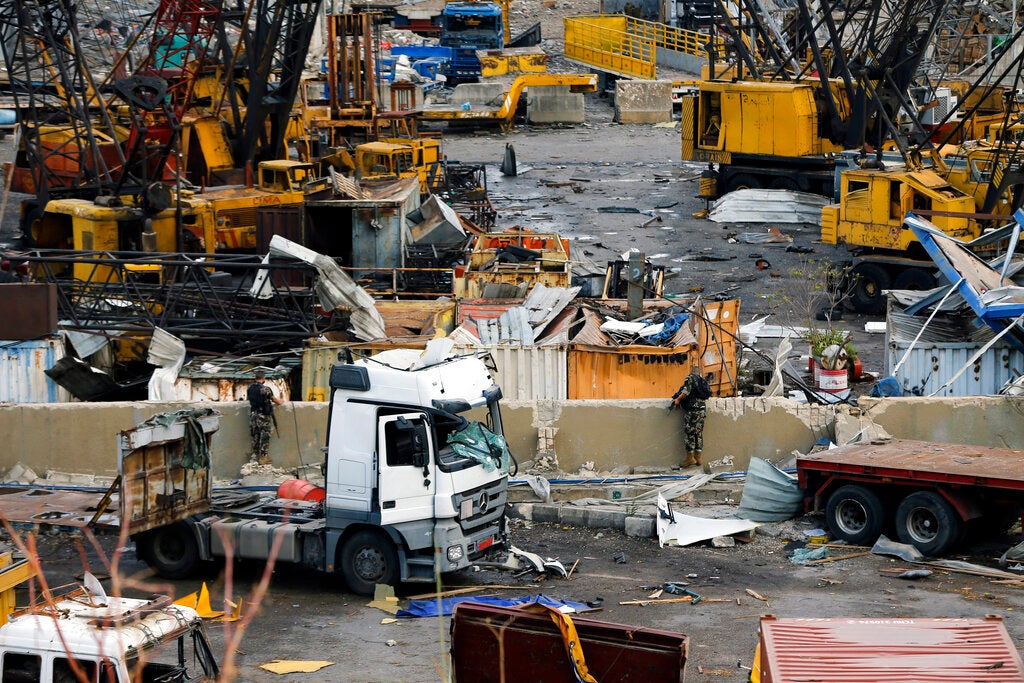 Under international maritime conventions and some domestic laws, commercial vessels must have insurance to cover events such as environmental damage, loss of life or injury caused by a sinking, spill or collision. Yet the Rhosus was uninsured, according to two sources familiar with the matter.

The ship’s Russian captain, Boris Prokoshev, said by phone from his home in Sochi, Russia, that he had seen an insurance certificate but could not vouch for its authenticity.

Reuters was unable to obtain a copy of the ship’s documents.

The Mozambican firm that ordered the ammonium nitrate, Fábrica de Explosivos Moçambique (FEM), was not the cargo owner at the time because it had agreed to only pay on delivery, according to its spokesman, Antonio Cunha Vaz.

The producer was Georgian fertilizer maker Rustavi Azot LLC, which has since been dissolved. Its owner at the time, businessman Roman Pipia, told Reuters he had lost control of the Rustavi ammonium nitrate plant in 2016. UK court documents show that the firm was forced by a creditor to auction off its assets that year.

The factory is now run by another firm, JSC Rustavi Azot, which also said it could not shed light on the cargo owner, according to the plant’s current first deputy director, Levan Burdiladze.

FEM said it had ordered the shipment through a trading firm, Savaro Ltd, which has registered companies in London and Ukraine but whose website is now offline.

A visit to Savaro Ltd’s listed London address on Monday found a Victorian terraced house, with a locked and barred door, near the fashionable bars of Shoreditch. No one responded to knocks on the door.

A source familiar with the inner workings of Savaro’s trading business said it sold fertilizer from ex-Soviet Union states to clients in Africa.

Ukraine-based businessman Vladimir Verbonol is listed as director of Savaro in Ukraine, according to Ukrainian corporate database You Control. Reuters was unable to contact Verbonol for comment. 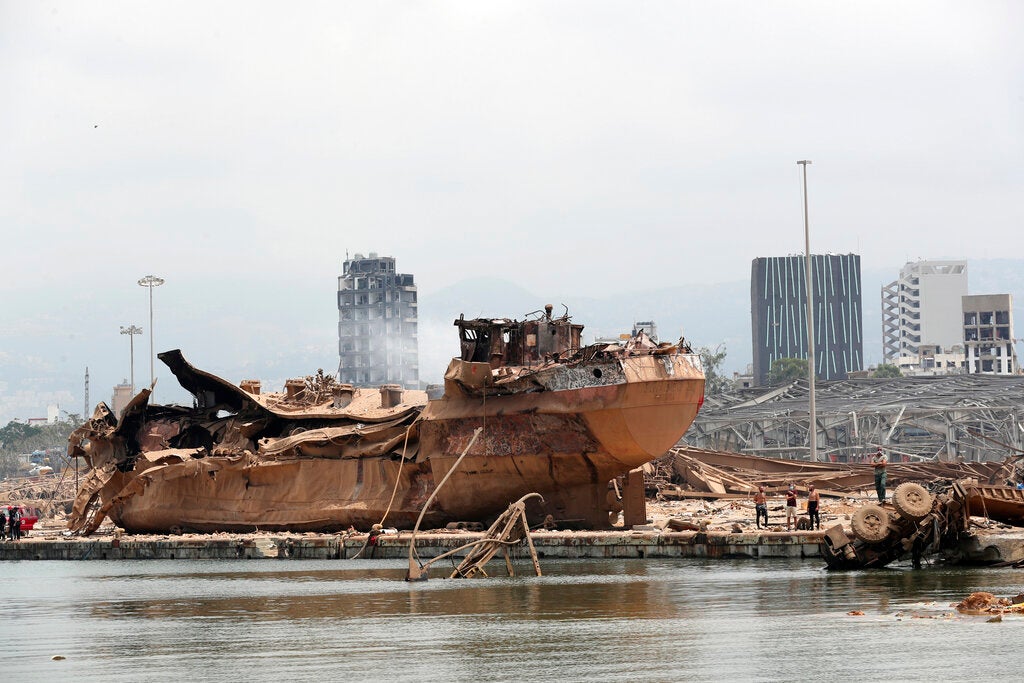 People stand by the wreckage of a ship at the devastated site of the explosion in the port of Beirut, Lebanon, Thursday Aug.6, 2020. French President Emmanuel Macron came in Beirut to offer French support to Lebanon after the deadly port blast.(AP Photo/Thibault Camus, Pool)

As grief and anger over the blast turn to civil unrest in Beirut, there are signs the Lebanese government’s promised investigation has already turned its sights back to the Rhosus and Grechushkin, the man the crew considered as its owner.

A security source said Grechushkin was questioned at his home in Cyprus last Thursday about the cargo. A Cypriot police spokesman said an individual, whom he did not name, had been questioned at the request of Interpol Beirut.

The Rhosus arrived in Beirut in November 2013 with a leak and in generally poor condition, captain Prokoshev said. It had already been beset with problems.

In July 2013, four months before docking in Beirut, the ship was detained for 13 days by port authorities in Seville, Spain, after multiple deficiencies including malfunctioning doors, corrosion on the deck area and deficient auxiliary engines were found, according to shipping data. It resumed sailing after inspection firm Maritime Lloyd issued a cargo ship safety construction certificate, which would have involved a survey of the ship, the data showed.

Teimuraz Kavtaradze, an inspector at Georgia-based Maritime Lloyd, which does not rank among the most prominent and widely-used inspection firms, said he could not confirm whether or not the firm had provided any inspection documents to port officials in Seville. He said he was working for Maritime Lloyd in 2013 but that other staff and the management had since changed.

Moldova, where the Rhosus is registered, lists the owner of the ship as Panama-based Briarwood Corp, a certificate of ownership seen by Reuters shows. Reuters was not immediately able to identify Briarwood Corp as a Panamanian registered company. Panama’s maritime authorities did not immediately respond to requests for comment.

The captain passed Reuters an email address that they had been using for Teto Shipping, but requests for comment to the same address went unanswered. The captain said he regarded Grechushkin and Teto as the same entity.