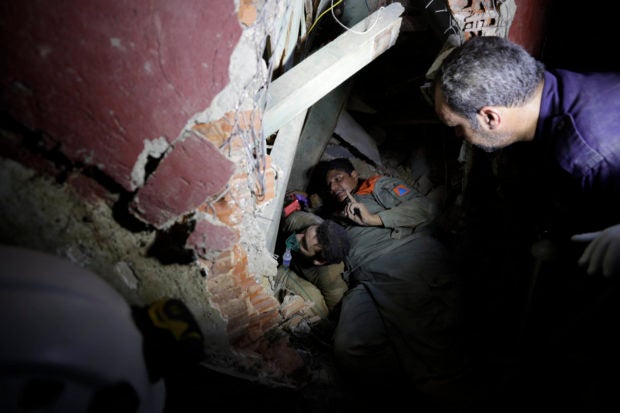 SEARCH AND RESCUE Lebanese soldiers on Wednesday search for survivors in one of the buildings flattened by a massive blast the previous night at the port of the Lebanese capital of Beirut. More than 100 people were killed and over 4,000 were injured with more bodies believed buried under the debris. —AP

BEIRUT, Lebanon — Residents of Beirut awoke to a scene of utter devastation on Wednesday, a day after two massive explosions at the port sent shock waves across the Lebanese capital, killing scores of people and wounding thousands.

Smoke was still rising from the port, where a towering grain silo had been shattered. Major downtown streets were littered with debris and damaged vehicles, and building facades were blown out. At hospitals across the city, people had been waiting all night for news of loved ones who had gone missing or were wounded. Others posted requests for help online.

The Lebanese Red Cross said more than 100 people were killed and over 4,000 injured. Beirut’s governor said 300,000 people were left homeless and damage was estimated at up to $5 billion.

‘There could be more’

The second of the two blasts sent shock waves that shattered windows, smashed masonry and shook the ground across the Lebanese capital.

Officials said they expected the death toll to rise further as emergency workers dug through rubble to rescue people and remove the dead.

The Philippine Department of Foreign Affairs (DFA) said two Filipinos were among the dead and eight others were injured, including one in critical condition. All of them were inside their employers’ home when the massive explosions occurred around 6 p.m. on Tuesday.

It said 12 others were reported missing, 11 of them seafarers who jumped into the water from their ship, the MV Orient Queen, which was docked at the port.

The Philippine Embassy, a 20-minute drive away from the Beirut port, was damaged but all its workers were safe.

“Even we in the embassy outside Beirut felt the shock wave, so it is possible that there could be more who were injured from collapsed buildings,” Ajeet-Victor Panemanglor, charge d’affaires of the Philippine Embassy in Beirut, told ABS-CBN’s Teleradyo on Wednesday.

According to the Department of Labor and Employment, there are more than 33,000 Filipinos in Lebanon, including nearly 12,000 who are undocumented.

Prime Minister Hassan Diab said that 2,750 tons of the agricultural fertilizer ammonium nitrate that had been stored for years in a portside warehouse had blown up, sparking “a disaster in every sense of the word.”

“What happened today will not pass without accountability,” said Diab. “Those responsible for this catastrophe will pay the price.”

The blast appeared to have been triggered by a fire and struck with the force of an earthquake and sent up a mushroom cloud and generating a shock wave.

A security source and local media said it was started by welding work being carried out on a hole at one warehouse.

Videos showed what looked like a fire erupting nearby just before the blasts, and local TV stations reported that a fireworks warehouse was involved.

A soldier at the port told Agence France-Presse: “It’s a catastrophe inside. There are corpses on the ground. Ambulances are still lifting the dead.”

“It was like an atomic bomb,” said Makrouhie Yerganian, a retired schoolteacher in her mid-70s.

“I’ve experienced everything, but nothing like this before, even during the country’s 1975-1990 Civil War,” she said.

“We heard an explosion, then we saw the mushroom,” said a Beirut resident, who witnessed the second deafening explosion from her balcony in the city’s Mansourieh district. “The force of the blast threw us backward into the apartment.”

The explosion raises concerns about how Lebanon will continue to import nearly all of its vital goods with its main port devastated.

The port’s major grain silo is run by the Lebanese Ministry of Economy and Trade. Drone footage shot on Wednesday by The Associated Press showed that the blast tore open the silos, dumping their contents into the debris and earth thrown up by the blast. Some 80 percent of Lebanon’s wheat supply is imported, according to the US Department of Agriculture.

Estimates suggest 85 percent of the country’s grain was stored at the now-destroyed silos.

Lebanon’s state-run National News Agency quoted Raoul Nehme, the minister of economy and trade, as saying all the wheat stored at the facility had been “contaminated” and couldn’t be used. However, he insisted Lebanon had enough wheat for its immediate needs.

The explosions hit a country already reeling from its worst economic crisis in decades which has left nearly half of the population in poverty, as well as from the coronavirus pandemic.

Israeli officials said Israel, which has fought several wars with Lebanon, had nothing to do with Tuesday’s blast and said their country was ready to give humanitarian and medical assistance.

The United States, Britain, France and Germany expressed shock and sympathy and said they were ready to help.

In a statement, Roque said the Philippines was “in solidarity with the people of Lebanon in this period of great grief.”

Balanga Bishop Ruperto Santos, vice chair of Episcopal Commission on Migrants and Itinerant People of the Catholic Bishops’ Conference of the Philippines, offered prayers for the Lebanese people.

“Our hearts are with them, one with Lebanon in spirit and prayers,” Santos said. “We intercede to God’s power healing and remedy to those who are injured. May those left behind find comfort with God,” he said.