SPARTA, North Carolina — The most powerful earthquake to hit North Carolina in more than 100 years shook much of the state early Sunday, rattling homes, businesses and residents.

There were no reports of serious injuries, but some minor structural damage was reported in Sparta, as well as cracks inroads. Images on social media also showed items knocked off of grocery store shelves. 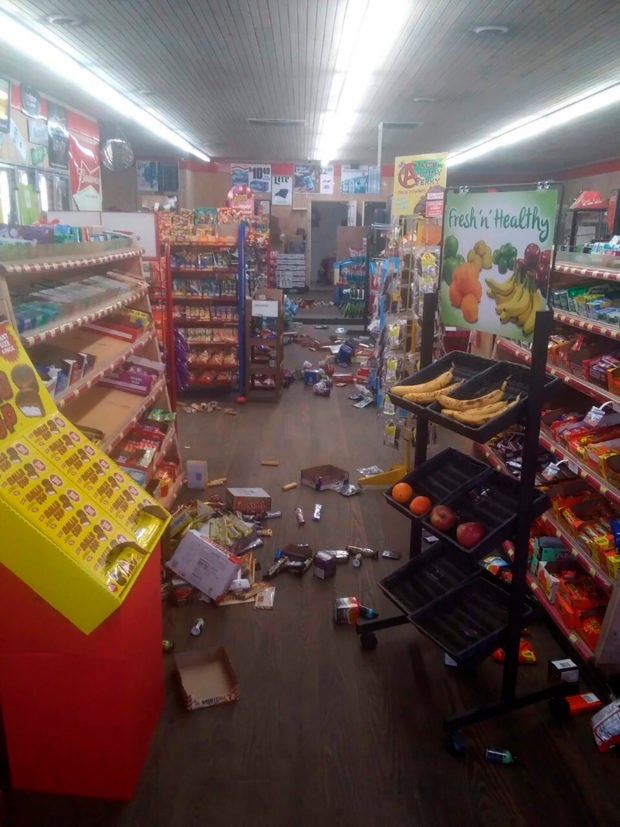 Various items litter the floor of the 4 Brothers Store in Sparta, N.C. after an earthquake shook much of North Carolina early Sunday, Aug. 9, 2020. (Michael Hull via AP)

The U.S. Geological Survey said on its website that there are chances for one or more aftershocks in the next week, forecasting a 45% chance for earthquakes of magnitude 3 or greater. The chances of another quake as strong as the one on Sunday or greater was about 1%, the geological survey said.

Alleghany County, which includes Sparta, declared a state of emergency Sunday afternoon.
Michael Hull was standing in his driveway at his home in Sparta when he noticed a group of deer running.

“Not even a minute passed and the side-to-side motion started,” Hull said. “It takes you a minute to realize what’s happening, and you just can’t believe it. Then it was over. It was loud, like God was shaking a mountain at you, literally.”

Karen Backer was in her Greensboro apartment when she heard initially mistook banging in her kitchen for her roommate.

“Nope, it was the cabinet doors ‘clinking’ open and closed! My neighbors on the other hand said they felt our apartment building shaking,” Backer said. “Well, sadly, nothing surprises me in 2020, but a hurricane and an earthquake in the same week is crazy.”

It was the largest earthquake to hit the state since 1916, when a magnitude 5.5 quake occurred near Skyland, the weather service said.

The quake’s epicenter was about 2.5 miles (four kilometers) southeast of Sparta, just south of the Virginia-North Carolina border, the geological survey said. The USGS said the population in the affected region resides in structures “that are resistant to earthquake shaking, though vulnerable structures exist.”

The quake was felt in nearby states including Virginia, South Carolina, and Tennessee.