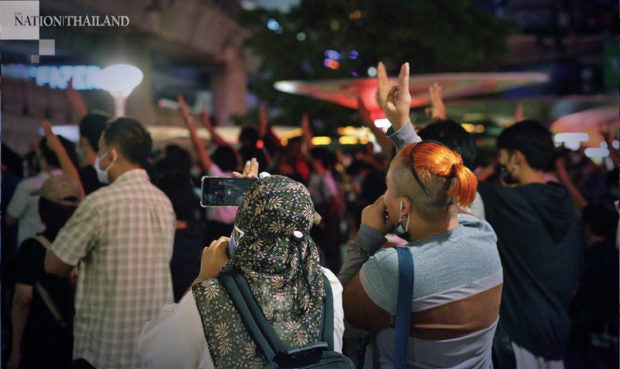 Pro-democracy protests hold a flash mob in shopping areas of Bangkok downtown on Saturday (August 8). Stepping up their campaign for dissolving Parliament, rewriting the Constitution and demanding that the government stop intimidating people, they plan to hold a big rally on August 16 at Democracy Monument in Bangkok. The Nation/Asia News Network

BANGKOK — Academics and opposition politicians have warned the Thai political establishments to embrace pro-democracy protesters’ demands and reform themselves to prevent aggravation of the current conflict.

The arrest and release of key protest leaders is a tactic of intimidation adopted by the military-sponsored government, aimed at slowing down the momentum of the pro-democracy protests, Titipol Phakdeewanich, dean of the faculty of political science at Ubon Rathchathani University, told the Nation on Sunday (August 9).

He made a comment in response to the release on bail of Anon Nampha, a prominent activist and lawyer, and Phanuphong Chatnok, a key leader of the Free Youth movement, on Saturday.

Anon himself on Saturday had thanked the Criminal Court,  saying that he had confidence in the court, which did not toe the line of excessive measures imposed by police against protesters.

Titipol said that there may not be any significant political change immediately. Political establishments had not seen  any reform since the military coup in 2014, they just run the country for their own vested interest, he argued.

He warned that the current on-going protests gives food for thought for reforms.

“Political establishments could no longer use political propaganda as an effective tool to silence dissident voices, as people could access more information,“ he pointed out.

To avoid confrontation, they have to embrace the protesters’ demands and to reform themselves,” he warned the military and its allies.

Youth-led protesters are demanding that the government dissolve Parliament, stop intimidating people and rewrite the Constitution. Following a flash mob in downtown Bangkok on Saturday evening and political gatherings in other provinces, protesters plan to hold a big rally on August 16 at Democracy Monument in Bangkok.

Some outspoken pro-democracy academics,  including Pavin Chachavalpongpun, a Thai associate professor at Kyoto University in exile in Japan, and Somsak Jeamteerasakul, a prominent historian in exile in France, via Facebook posts have blamed politicians and other institutions for not making enough efforts in response to the protesters’ demands and their proposal of reforming the monarchy.

In response to criticism by these academics, Teerajchai Phunthumas, the MP of Move Forward Party, told the Nation that his party often highlights the many flaws in the Constitution during Parliament debates, pointing to the lack of citizens’ participation in the drafting process in the first place.

“Regarding the current protest, we want to let the student protests unravel themselves naturally,” he said.

The current protest bears similarity with the first student uprising in 1973 than the protest in May uprising in 1992 or the later protests led by the red and yellow-shirt movements which had a high degree of well-planned involvement by political groups, not by students themselves, he explained.

Politicians on the government side, such as Suporn Atthawong, vice minister of the Prime Minister’s Office, have expressed their opposition to the planned big rally on August 16. He argued that PM Prayut Chan-o-cha had already promised to amend the Constitution. But Teerajchai countered Suporn’s claim, saying that the government’s promise was just a time-buying maneuver.

“The government can rewrite the Constitution right away, as there is a consensus that the current Constitution has many flaws; for example the system of 250 military-appointed senators is undemocratic and a tool for the military to continue their authoritarian power,” he lamented.

Meanwhile, Chaturon Chaisang, a prominent opposition politician, posted on his Facebook page on Sunday that to get out of the current political crisis, there must be first a partial rewriting of the Constitution, abolishing of the senators, followed by the dissolution of the lower house of Parliament and the holding of general elections. Chaturon, a former member of Pheu Thai Party and the disbanded Thai Raksa Chart Party, said on the next election day people should be invited to vote on a referendum for fully rewriting the Constitution, then proceed to draft the full Constitution. When the draft is finished, the referendum on the new constitution should be held again, he suggested. This will ensure the people’s full participation in the rewriting, owning the highest law, and making the new Constitution lasting, he added.

Read Next
DOH: Wearing of face shields only encouraged and not mandatory, for now
EDITORS' PICK
Acer Philippines welcomes you to its first flagship store
New Year, New Rediscoveries
Biden says Covid-19 expected to kill ‘well over 600,000’ in US
UP president challenges AFP claim on Reds’ campus infiltration
WHO says fabric facemasks still work against virus variants
Is your company a growth champion? Stand up and be recognized!
MOST READ
NBI files raps vs top execs of 2 tech firms
Ate Vi’s message to those against ABS-CBN’s franchise renewal
Cop, 12 others killed in Maguindanao shootout
OVP spokesman tells Mocha Uson: Don’t drag us into your nonsense
Don't miss out on the latest news and information.