9 babies dumped every month in Malaysia 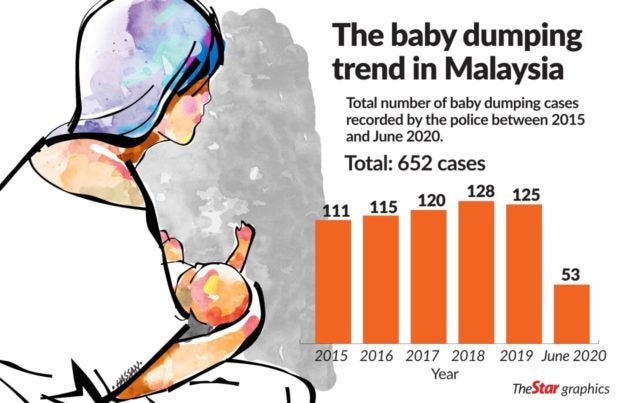 KUALA LUMPUR — Tossed out the window, left by the roadside in a paper bag and put in a box covered with leaves.

And it’s not rubbish we’re talking about.

That’s how babies were dumped, in a few incidents that came to light recently.

Some 53 cases of baby dumping occurred between January and June this year, reveals the Women, Family and Community Development Ministry.

This means about nine babies were abandoned each month this year, and most were found dead.

From 2015 to June this year, the police recorded a total of 652 cases, and Selangor topped the list with the most incidents (139).

“These are common dumping grounds because there are no CCTV cameras, less frequented by the public and are easily accessible,” she tells Sunday Star.

Baby dumping is a long standing problem, and it’s a complex one.

Last month, an 18-year-old student who allegedly flung her newborn baby out of a 13th-floor apartment unit in Georgetown, was charged with murder – an offense that carries the death sentence upon conviction.

However, some argue that the charge is too harsh, as many cases involve youths who lack support, sex education and awareness.

Some believe it’s time for more baby hatches to be set up, as a safe place for the little ones to be given up legally for adoption.

However, the Perak government had said it was not in favor of this, to avoid sending out a signal that it is encouraging baby dumping.

For the ministry, more effort is needed to study this move first before anything is decided.

“Having baby hatches will enable intervention. It is a debatable measure, but it’s also sensible in preserving the rights and welfare of the baby.

“The ministry may need more feedback before registering this effort as an alternative in reducing the rise of the baby dumping cases,” says the ministry.

Currently, there are 10 baby hatches in Malaysia – three centers are operated by the OrphanCare Foundation in Petaling Jaya, Johor Baru and Sungai Petani, Kedah.

The other seven are operated in collaboration with KPJ Hospitals at the group’s branches around the country.

To better tackle baby dumping, the ministry, through the Institut Sosial Malaysia, will carry out a study to examine the effectiveness of existing programs developed by the ministry.

“This will be done by reviewing states with the highest number of baby dumping cases,” the ministry adds.

Current efforts by the ministry include conducting sexual reproductive health (SRH) awareness programs for teenagers, counseling services for pregnant girls and providing places of refuge for women who are pregnant out of wedlock to deliver their baby safely.

On youths lacking awareness about baby dumping, the ministry says ignorance is not an excuse for a crime, according to common law.

Infanticide, or an act that causes death to a newborn child, is punishable under Section 309B of the Penal Code with a maximum jail term of 20 years and a fine.

“However, the mental status of the individual may be considered in the court ruling.

“The lack of legal literacy among adolescents is a contributor to this serious offense.

“The ministry has taken more initiative to include the legal consequences of infanticide and sexual offenses in our latest SRH Module for adolescents called the Mekar Module, published this year.

“It is hoped that this module can be implemented by next year,” says the ministry.

One of the main reasons for baby dumping, as identified by the Social Welfare Department, is the lack of SRH knowledge among teens, leading to unprotected sex and unwanted pregnancies.

“Some girls who became pregnant out of wedlock also lack family support, while others were duped or given false promises of marriage by their boyfriends,” the ministry adds.

Baby dumping cases also occur because the girls were unaware of the help they could get from relevant organizations.

While this issue requires comprehensive action, the ministry says more preventive steps rather than recovery programs should be designed to address this matter.

“The focus is to increase awareness programs such as SRH education, parenting, pre-marriage and counseling to be implemented for teens and adults with necessary knowledge to address the issue of baby dumping and unwanted pregnancy.

“Since abortion is illegal except on medical grounds, there is need to educate teenagers and adults on the laws related to abortion and its offenses,” it says.

It’s also important to know where to get help if anyone is caught in an unwanted pregnancy without support.

For this, the ministry says the public can get help from counsellors through its Talian Kasih 15999 hotline or WhatsApp number at 019-2615999.

“Our registered counsellors can guide them on how to cope with the situation they are facing and also where they can get the appropriate help,” the ministry adds.