S. Korea to come under direct influence of Typhoon Jangmi from Monday 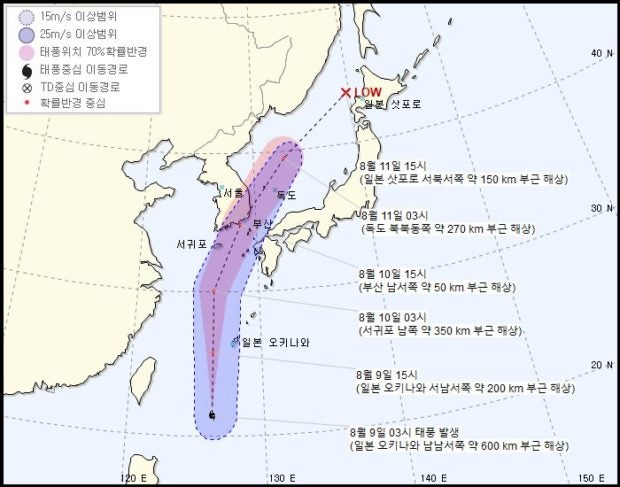 SEOUL — South Korea will come under the direct influence of Typhoon Jangmi, the season’s fifth typhoon, this week, which will bring heavy rain to the country’s flood-hit southeastern region, the state weather agency said Sunday.

The tropical storm, which formed early Sunday southwest of Okinawa and started to move northeast, is expected to pass waters 350 kilometers south of Jeju Island around 10 a.m. Monday, according to the Korean Meteorological Administration (KMA).

Around 3 p.m. on the same day, it is predicted to arrive in waters 30 km southwest of Busan, some 325 km southeast of Seoul, it said.

South Korean will experience rain over the coming days, while the typhoon will strike the southeastern region of South Gyeongsang Province and Jeju Island, with strong winds and heavy downpours.

The KMA advised people on the southeastern seaside to take extra precautions and be prepared for dangerous tides.

South Korea has been suffering from dayslong torrential rain amid the prolonged monsoon season that started in late June.

Over the last nine days, about 30 people have been killed and 12 have gone missing due to floods and landslides. Yonhap

Read Next
9 babies dumped every month in Malaysia
EDITORS' PICK
52 new COVID-19 cases: Baguio’s single day record so far
Gabby’s resignation from ABS-CBN paves way for next generation Lopezes to take up new challenge
What’s happening to the ICT Industry and its role in helping businesses today
Comelec exploring possibility of holding 2022 elections for 2-3 days
Water remains our saving grace right now
More Cebu schools are now powered by Smart
MOST READ
ABS-CBN chairman Gabby Lopez resigns from network, other Lopez-owned firms
US Congress bill seeks to halt assistance to PH police, military
WATCH: Liza Soberano joins Mimiyuuuh’s ‘It Really Hurts’ dance challenge
Suspension of US security aid to PH ‘not only our loss but theirs as well’ — Lacson
Don't miss out on the latest news and information.