Much of Canada’s remaining intact ice shelf has broken apart into hulking iceberg islands thanks to a hot summer and global warming, scientists said. 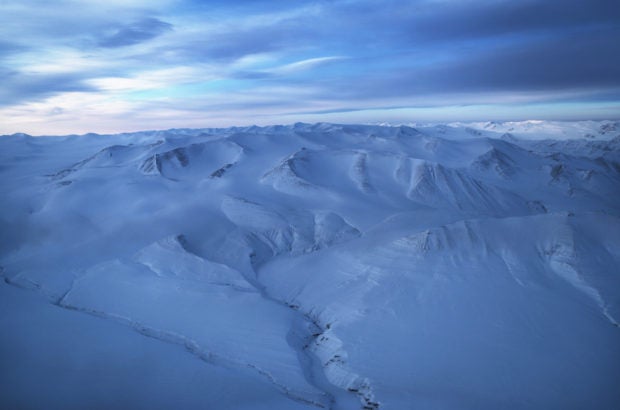 ELLESMERE ISLAND, CANADA – MARCH 30: A section of an ice field is seen from NASA’s Operation IceBridge research aircraft on March 30, 2017 above Ellesmere Island, Canada. The ice fields of Ellesmere Island are retreating due to warming temperatures. NASA’s Operation IceBridge has been studying how polar ice has evolved over the past nine years and is currently flying a set of eight-hour research flights over ice sheets and the Arctic Ocean to monitor Arctic ice loss aboard a retrofitted 1966 Lockheed P-3 aircraft. According to NASA scientists and the National Snow and Ice Data Center (NSIDC), sea ice in the Arctic appears to have reached its lowest maximum wintertime extent ever recorded on March 7. Scientists have said the Arctic has been one of the regions hardest hit by climate change. Mario Tama/Getty Images/AFP

Canada’s 4,000-year-old Milne Ice Shelf on the northwestern edge of Ellesmere Island had been the country’s last intact ice shelf until the end of July when ice analyst Adrienne White of the Canadian Ice Service noticed that satellite photos showed that about 43% of it had broken off. She said it happened around July 30 or 31.

Two giant icebergs formed along with lots of smaller ones, and they have already started drifting away, White said. The biggest is nearly the size of Manhattan — 21 square miles (55 square kilometers) and 7 miles long (11.5 kilometers). They are 230 to 260 feet (70 to 80 meters) thick.

“This is a huge, huge block of ice,” White said. “If one of these is moving toward an oil rig, there’s nothing you can really do aside from move your oil rig.”

The 72-square mile (187 square kilometer) undulating white ice shelf of ridges and troughs dotted with blue meltwater had been larger than the District of Columbia but now is down to 41 square miles (106 square kilometers).

Temperatures from May to early August in the region have been 9 degrees (5 degrees Celsius) warmer than the 1980 to 2010 average, University of Ottawa glaciology professor Luke Copland said. This is on top of an Arctic that already had been warming much faster than the rest of globe, with this region warming even faster.

“Without a doubt, it’s climate change,” Copland said, noting the ice shelf is melting from both hotter air above and warmer water below.

“The Milne was very special,” he added. “It’s an amazingly pretty location.”

Ice shelves are hundreds to thousands of years old, thicker than long-term sea ice, but not as big and old as glaciers, Copland said.

Canada used to have a large continuous ice shelf across the northern coast of Ellesmere Island in the Canadian territory of Nunavut, but it has been breaking apart over the last decades because of man-made global warming, White said. By 2005 it was down to six remaining ice shelves but “the Milne was really the last complete ice shelf,” she said.

“There aren’t very many ice shelves around the Arctic anymore,” Copland said. “It seems we’ve lost pretty much all of them from northern Greenland and the Russian Arctic. There may be a few in a few protected fjords.”