Endangered Brazilian monkeys get a bridge to themselves

RIO DE JANEIRO  — The overpass juts from a forest over a four-lane highway in a rural area outside Rio de Janeiro. It’s meant for a very special sort of pedestrian: golden lion tamarins, small orange primates that for decades have been at risk of extinction. 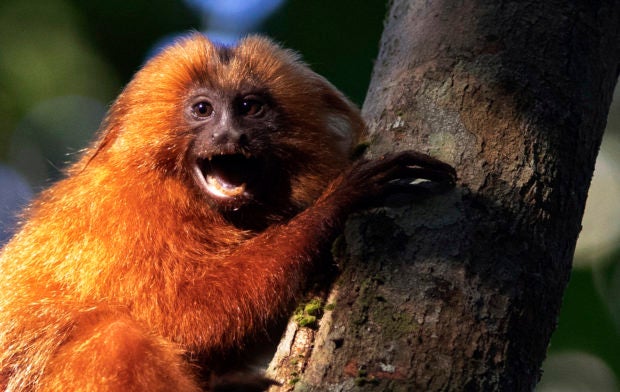 A Golden Lion Tamarin holds on to a tree in the Atlantic Forest region of Silva Jardim in Rio de Janeiro state, Brazil, Thursday, Aug. 6, 2020. A recently built eco-corridor will allow these primates to safely cross a nearby busy interstate highway bisecting one of the last Atlantic coast rainforest reserves. (AP Photo/Silvia Izquierdo)

The little primate, whose name derives from the shock of orange fur that frames its face like a mane, has watched its habitat shrink over decades — even centuries — of rampant deforestation. Animal traffickers have also targeted the brightly colored monkeys.

Bowing to pressure from an environmental association — and following a court order — the highway’s administrator in late July finished construction of the overpass that’s aimed at helping conserve the species.

About 20 meters (65 feet) wide and twice as long, the bridge connects the Poco de Dantas biological reserve in Rio state’s Silva Jardim municipality with a farm that the Golden Lion Tamarin Association acquired to transform into an ecological park.

Recently planted trees on the overpass — only inches tall at present — are expected within two years to reach heights allowing the monkeys to cross from one swath of Atlantic forest to another. 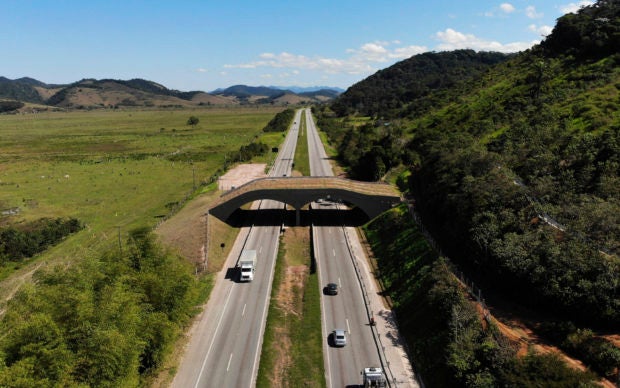 An eco-corridor for the endangered Golden Lion Tamarin crosses over an interstate highway in Silva Jardim, Rio de Janeiro state, Brazil, Thursday, Aug. 6, 2020. Once recently planted trees grow on the bridge, it will allow the primates to safely cross the busy highway bisecting one of the last Atlantic coast rainforest reserves. (AP Photo/Mario Lobao)

Some of the monkeys, which about a half kilogram (a pound), can be seen clinging to the trees beyond in the forest beyond.

“Our objective is to consolidate a landscape of conservation for the monkey. The biggest problem is the fragmentation of the forests, which were already very deforested by the expansion of urban centers,” said Luiz Paulo Ferraz, a geographer and executive secretary of the association, known by its Portugese initial as AMLD. Connecting the forests means more space for the primates to roam and reproduce, and so to sustain genetic diversity, he said.

Before colonization, the Atlantic forest biome covered 330 million acres (more than 500,000 square miles) near and along Brazil’s coast, of which more than 85% has been cleared, threatening plant and animal species, according to The Nature Conservancy.

More than 70% of Brazil’s population lives in areas that are or once were Atlantic forest, according to Rafael Bitante, chief of forest restoration at SOS Atlantic Forest, another environmental organization.

And while few Brazilians have seen a golden lion tamarin in person, virtually all have held one in their hands: It features on Brazil’s 20 reais bill (less than $4). The animal has become a symbol for wildlife preservation in Brazil and beyond.

In the 1970s, when scientists began conservation efforts, there were just 200 individuals of the species remaining, according to the AMLD. Creation of the government’s Poco de Dantas reserve in 1974 was the jumping-off point for rebuilding the animal’s population and habitat in Rio state’s interior. In 2003, its international conservation status was upgraded to “endangered” from “critically endangered.”

The number of golden lion tamarins reached 3,400 in 2014, the year of the most recent census by AMLD. A yellow fever outbreak in 2016 and 2017 caused the death of an estimated 900 animals – the biggest blow to the species since the start of conservation efforts.

They require more habitat to boost their numbers, according to Carlos Alvarenga Pereira, the coordinator of AMLD’s forest restoration program.
“It’s a local challenge, and requires the participation of rural communities, convincing farmers to replace unproductive farmland into recovered forest,” Pereira said.

Public prosecutors had to go to court to get a judge’s order requiring the highway operator to erect the bridge, which was a condition in the public tender for the highway’s concession.

The association’s Ferraz said it is a rare example in recent years of an infrastructure project aimed at encouraging conservation in Brazil’s Atlantic forest.