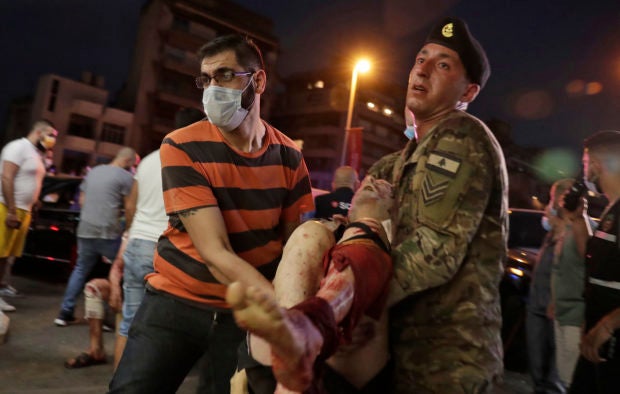 EDITORS NOTE: Graphic content / A Lebanese army soldier and a man carry away an injured man at a hospital in the aftermath of an explosion at the port of Lebanon’s capital Beirut on August 4, 2020. – Two huge explosions rocked the Lebanese capital Beirut, wounding dozens of people, shaking buildings and sending huge plumes of smoke billowing into the sky. Lebanese media carried images of people trapped under rubble, some bloodied, after the massive explosions, the cause of which was not immediately known. (Photo by IBRAHIM AMRO / AFP)

Beirut, Lebanon — A huge blast at Beirut port that devastated entire neighborhoods of the city has killed more than 100 people and injured over 4,000, the Lebanese Red Cross said Wednesday.

“Until now over 4,000 people have been injured and over 100 have lost their lives. Our teams are still conducting search and rescue operations in the surrounding areas,” a statement said.