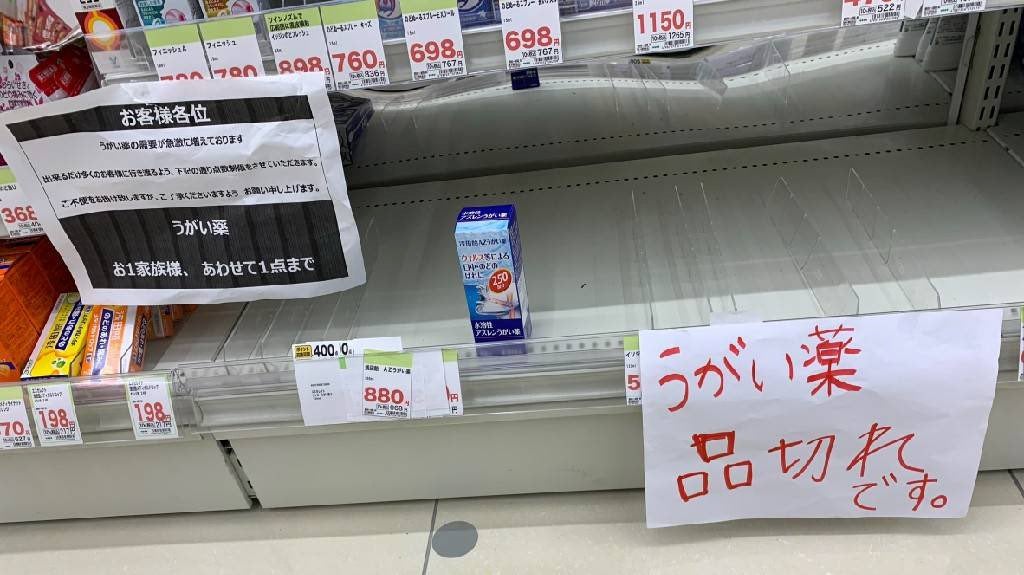 Empty shelves of Betadine are seen amid the coronavirus disease (COVID-19) outbreak, in Osaka, Japan August 4, 2020 in this picture obtained from social media. “TWITTER / @KUMAKATACH” via REUTERS

TOKYO–Japanese drugstores were stripped bare of gargling solution by Wednesday, a day after the governor of the western prefecture of Osaka suggested it could help fight coronavirus, triggering panicked buying reminiscent of the early days of mask shortages.

Hundreds of thousands of people posted pictures of emptied shelves on Twitter, accompanied by handwritten “Out of Stock” notices, as they canvassed suggestions on how to acquire the coveted antiseptic.

On Tuesday, Osaka Governor Hirofumi Yoshimura said a study showed a smaller viral load in the saliva of 41 patients with mild symptoms after regular gargling with a medicine infused with povidone-iodine solution than in those who had not.

“Perhaps we can even overcome the coronavirus with gargling medicine,” he told a mid-afternoon news conference, speaking of the study on those convalescing in regional hotels which was released by an Osaka hospital.

As the Japanese official spoke, shares of Meiji Holdings Co <2269.T>, which sells a popular medicine previously marketed as Isojin, skyrocketed, gaining as much as 7.7% by late on Tuesday.

The shares were down 4% on Wednesday, but more than 1.2 million tweets had employed the hashtag #Isojin by afternoon.

As governments worldwide have struggled to rein in the virus, which has killed nearly 700,000 people and infected more than 18 million, some in authority have seized on any treatment seeming to offer a glimmer of hope.

For example, U.S. President Donald Trump has persistently promoted the unproven drug hydroxychloroquine as successful in treating the virus, and in April, he asked publicly if injecting disinfectant might help.

Japan’s top government spokesman, Yoshihide Suga, said he was aware of the Osaka governor’s comments, including the fact that researchers would try to determine if the ingredient could keep disease symptoms from worsening.

“The government will closely watch developments of the research,” Suga told a news conference.

Some experts were skeptical, however.

“I think these kinds of claims might even lead to a high number of false negatives for PCR tests,” pharmacist and medical writer Shuichi Aoshima wrote on Twitter, adding that tests after use of the germicide would register lower levels of the virus.

“It’s the same as dripping povidone-iodine onto a virus sample.”