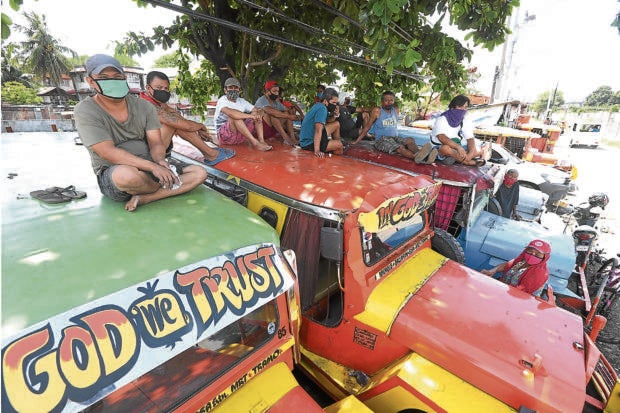 OUT OF WORK Drivers belonging to the Airmen’s Jeepney Operators and Drivers Association in Pasay City hang out on top of their jeepneys in this June 23 photo, some three weeks after Metro Manila’s lockdown was eased to general community quarantine. The metropolis and its surrounding areas are back on stricter lockdown beginning Tuesday. —MARIANNE BERMUDEZ

MANILA, Philippines — Placing Metro Manila and neighboring provinces back under stricter lockdown protocols starting Aug. 4 will come at a huge cost in the short term, but an economist lawmaker and the administration’s chief economic manager are all for it, saying it would benefit the country in the long haul.

The Philippines stands to lose P12 billion per day of implementation of the modified enhanced community quarantine (MECQ), according to Marikina Rep. Stella Quimbo.

That could add up to a total of P180 billion if the nation’s capital remains under MECQ for 15 days as planned, Quimbo, who is also a University of the Philippines economics professor, said on Monday.

Earlier estimates by the National Economic and Development Authority showed that the economy shed P1.1 trillion during the first 45 days of the lockdown that was aimed at flattening the curve of COVID-19 cases.

In Metro Manila, economic losses from mid-March to end-April were placed at P589.3 billion, of which 77 percent was accounted for by the services sector.

Quimbo said she was supporting the return to MECQ from the less-stringent general community quarantine (GCQ) for Metro Manila and neighboring provinces despite the tremendous losses, as the “timeout” period could provide the impetus for accurate data reporting and a localized approach to the coronavirus pandemic.

The Management Association of the Philippines (MAP) called the MECQ a bitter but necessary pill. “We hope that the government will deep dive into our COVID-19 strategy and find more effective ways to execute it,’’ said its president, Francis Lim.

COVID-19 infections in the country have surged after quarantine restrictions were eased in Metro Manila and other parts of the country on June 1, the start of GCQ in the metropolis.

Presidential Adviser for Entrepreneurship Joey Concepcion, who earlier suggested GCQ until the end of the year, said he supported the decision to go back to MECQ.

“However, we cannot deny the challenges confronting our economy. We are entering a period of historically strong consumption levels from August to December when we expect most of the businesses to recover their losses. Of course, we will make the best out of the two-week MECQ,” he said.

Finance Secretary Carlos Dominguez III said bringing back the areas that accounted for over two-thirds of the economy to more stringent quarantine restrictions would slow recovery but would nevertheless stem the spread of COVID-19.

“In the short run, the return to MECQ may negatively affect livelihoods, consumer demand and production. However, if the time is used to boost all our medical resources and to prevent further spread of the virus, then the MECQ will be positive for the long haul,” Dominguez said.

He noted that the world was learning how to dance with the new coronavirus, taking “two steps forward, and one step back.’’

President Duterte declared late Sunday that MECQ — a compromise version of near-total lockdown under ECQ — would be reimposed in Metro Manila, Laguna, Cavite, Rizal and Bulacan in response to pleas from various groups of doctors and health professionals who had warned that the health-care system was on the brink of collapse.

Metro Manila was supposed to remain under GCQ until

MECQ would mean more restraints on people’s mobility with commuter trains out of operation, buses and jeepneys no longer permitted to ply roads, only essential businesses allowed to operate, and food establishments open only for takeout or drive-through service.

The imposition of MECQ over Metro Manila will further disrupt already struggling airlines and displace thousands of passengers hoping to return home.

Passenger ferries traveling to and from Manila would also be affected.

The Manila International Airport Authority said Philippine Airlines, Cebu Pacific and Air Asia Philippines should “properly inform their passengers about rebooking instructions in view of the temporary suspension of domestic flights in and out of Manila.”

Airlines would lose revenues and face added pressure through potential refunds for passengers who had booked flights for the duration of the MECQ. Ninoy Aquino International Airport accounts for most of flights in the country.

At the height of the lockdown from March to the end of May, major airlines were losing billions of pesos per month.

Gross domestic product is projected to shrink by 6 percent year-on-year in the second quarter, according to London-based global information provider IHS Markit Ltd.

“Jobs are also a long way from returning to pre-COVID-19 levels, with latest data signaling a steep fall in employment again in July,” said IHS Markit economist David Owen. “With unused capacity still apparent amid a fall in outstanding orders, it could be a while before firms bolster their payroll numbers.”

Up to 90 percent of the country’s labor force was fully or partially displaced by the lockdown between March and May, according to Ateneo economist Joseph Anthony Lim.

—With a report from Miguel R. Camus