FRANKFURT AM MAIN, Germany — Germany’s finance and economy ministers will be grilled by lawmakers on Wednesday about the massive fraud scandal that brought down payments provider Wirecard, amid criticism that authorities failed to act on early warning signs. 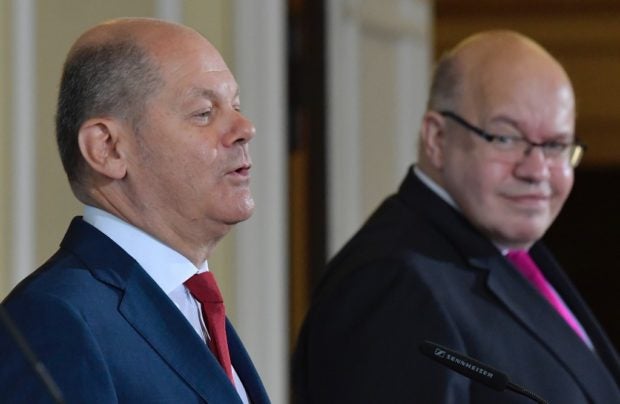 (FILES) In this file photo taken on June 12, 2020 German Finance Minister and Vice-Chancellor Olaf Scholz (L) and German Economy Minister Peter Altmaier give a joint press conference on the virus recovery plan, in Berlin. Germany’s finance and economy ministers will be grilled by lawmakers on July 29, 2020 about the massive fraud scandal that brought down payments provider Wirecard, amid criticism that authorities failed to act on early warning signs. Photo by Tobias SCHWARZ / AFP

Wirecard filed for insolvency last month after admitting that 1.9 billion euros ($2.2 billion) missing from its accounts did not exist.

Former CEO Markus Braun has been arrested on suspicion of falsifying accounts and market manipulation.

The Wirecard revelations have stunned Germany, drawing comparisons with the Enron accounting scandal in the United States almost two decades ago.

Questions are likely to focus on when exactly government officials and regulators learned of accounting irregularities at Wirecard, and if there were any regulatory failings.

Both ministers have vowed full transparency in a case that Scholz has called “an unparalleled scandal” and a blow to Germany’s finance reputation.

He has vowed to reform German finance watchdog Bafin, accused by critics of having been too lax on Wirecard, by giving it greater powers to intervene and launch investigations.

Bafin is “a toothless tiger” when it comes to overseeing large firms, MP Frank Schaeffler of the pro-business FDP party, and a member of the finance committee, told the Handelsblatt daily.

But Wirecard’s downfall has increasingly become a political hot potato as well, after finance ministry documents showed Scholz was told as early as February 2019 of misconduct suspicions.

Even more embarrassing was the revelation that Chancellor Angela Merkel promoted Wirecard on a trip to China in September 2019, when the firm was eyeing a foray into the Chinese market.

Merkel had “no knowledge” of the Wirecard irregularities at that time, her spokeswoman told reporters.

It boasted a market valuation of more than 23 billion euros ($26 billion) at one point — outweighing even giant Deutsche Bank. Its share price has since collapsed by more than 98 percent since last year.

Bafin responded by imposing a ban on traders betting against Wirecard stock and announcing a probe into FT journalists.

But Wirecard’s troubles exploded in June when longtime auditors Ernst & Young said they were unable to find 1.9 billion euros of cash meant to be sitting in trustee accounts at two Philippine banks.

Wirecard then acknowledged that the money, making up a quarter of its balance sheet, likely “did not exist.”

The firm’s Austrian born ex-CEO Braun was arrested and released on bail.

EY said it had been fed false statements and accused Wirecard of an “elaborate and sophisticated” fraud.

The scandal widened last week when Munich prosecutors re-arrested Braun and detained two other former board members for largescale “commercial fraud”, saying their investigations showed the trickery was already happening in 2015.

They also said evidence suggested banks and other investors were conned into providing funds of up to 3.2 billion euros ($3.7 billion) to Wirecard.

Those sums are now “very likely lost,” they added.

Ex-COO Marsalek, who is also wanted by German authorities, is on the run.