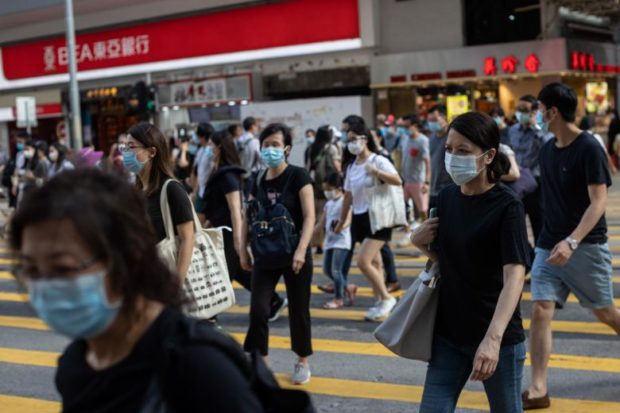 Hong Kong reported 106 new infections on July 28, of which 98 were local and the remainder imported. EPA-EFE via The Straits Times/Asia News Network

HONG KONG — For the seventh straight day, the city has recorded more than 100 new Covid-19 cases.

Health authorities on Tuesday (July 28) said there were 106 new infections, of which 98 were local and the remainder imported. This brings the total tally in the territory to 2,884, including 23 fatalities.

Ten of the deaths occurred in the past week. So far, 15 deaths have been recorded in July, with some of them linked to the spread in elderly care homes. The average age of those who died this month is 82.

Hospital Authority chief manager Sara Ho noted that Hong Kong’s fatality rate so far is at 0.8 per cent, which is “not exceptionally high” when compared with those overseas.

She added that the epidemiology of the patients admitted in the current third wave of infections show that a larger proportion of those who succumbed recently are past 65 years old, higher than in the second wave.

Asked if the Sept 6 Legislative Council elections will go ahead as planned, the authorities on Tuesday said that they were monitoring the pandemic closely.

Local media, quoting sources, have reported that the government could soon announce a delay in the poll for a year.

Earlier in the day, Food and Health Secretary Sophia Chan told a local radio program that she believed the number of local Covid-19 cases would drop over the next week or two, following further tightening of rules.

Speaking on an RTHK radio program, Professor Chan said latest figures showed that the transmission rate for the virus had dipped.

She added that at the start of the new wave of new cases earlier this month, the data showed that the transmission rate was one to four, that is, one individual could infect up to four others.

But this has now come down to one, Prof Chan noted.

The government on Monday further tightened social distancing measures in an attempt to contain local transmissions.

From Wednesday, the cap on public gatherings is two, down from four.

Masks have to be worn at all times in outdoor public places while dining in is banned at all eateries. The latter measure is expected to hit some 7,000 food and beverage operators.

Sports centers and swimming pools were added to the list of venues ordered to shut for seven days till August 4.

An initial list including gyms, amusement parks, cinemas, beauty parlors and nightclubs were ordered to shut on July 15 for a week. The closures were extended for a week till July 28 and now till Aug 4.