LIMA, Peru — A staggering 900-plus girls and women are missing and feared dead in Peru since COVID-19 confinement began, authorities said Monday. 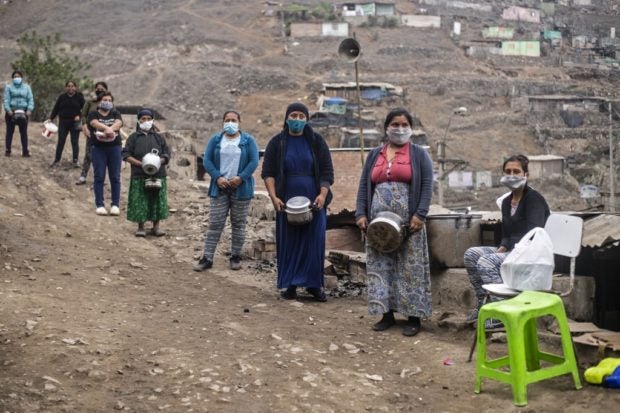 Women keep safety distances as they wait to get food at a soup kitchen of the Pamplona Alta section, which also suffers water shortage, in the southern outskirts of Lima on May 28, 2020, during the new coronavirus pandemic. Photo by ERNESTO BENAVIDES / AFP

The Andean nation home to 33 million people long has had a horrific domestic violence problem.

But COVID-19, which has compounded home confinement combined with job losses and a health crisis, has seen an already scary situation grow worse in just three and a half months, according to Eliana Revollar, who leads the women’s rights office of the National Ombudsman’s office.

Seventy percent of that figure are minors, she added.

“During the quarantine, from March 16 to June 30, 915 women in Peru were reported missing,” and feared dead, said Revollar.

Before COVID-19, five women were reported missing in Peru every single day; since the lockdown, the number has surged to eight per day.

Revollar said Peru’s situation was grim because the lack of a national missing persons registry made it hard for authorities to keep track of the crisis.

Walter Gutierrez, the ombudsman, told RPS Radio: “We need to know what has happened to them.”

Revollar said she would push for the creation of a missing persons registry.

Women’s rights groups and NGOs however say that very often police refuse to investigate domestic violence, make fun of victims, or claim that the missing have left their homes willingly.

But that doesn’t address the fact that Peru has a problem with domestic violence and other violence against women, as well as human trafficking and forced prostitution.

In January, the case of a university student and activist for women’s rights and safety, Solsiret Rodriguez, was in the headlines here — but only when her body was found three years after she went missing.

Last year there were 166 killings of women in Peru; just a tenth of those were cases of a person first being reported missing. And there were just under 30,000 calls to report domestic violence, according to the Women’s Ministry.

And coronavirus hasn’t spared Peru: it has had more than 384,000 coronavirus cases and 18,229 deaths. It is the third-hardest hit country in Latin America behind Brazil and Mexico.