LPA east of Bicol brings rains, but won’t turn into storm yet — Pagasa 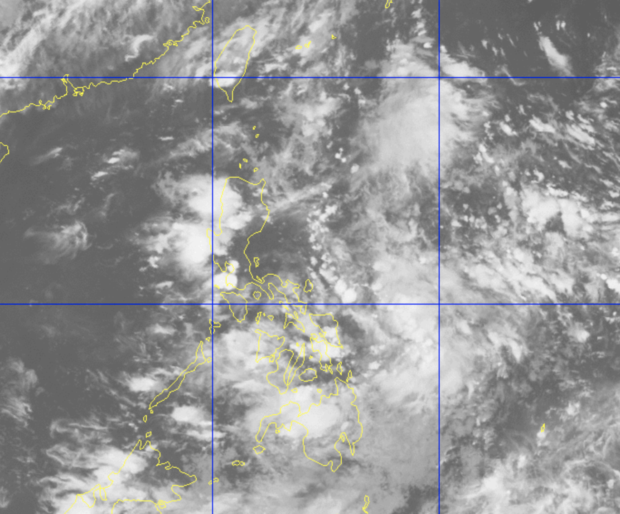 MANILA, Philippines — A new low pressure area (LPA) inside the Philippine area of responsibility bring rains to parts of the Bicol region and Visayas, but is not yet expected to turn into a tropical depression within 24 hours.

Latest forecasts from the Philippine Atmospheric, Geophysical and Astronomical Services Administration (Pagasa) on Monday showed that the LPA was last seen 410 kilometers east of Virac town in Catanduanes, and is expected to persist for two to three days.

Among the areas that would experience cloudy skies and light to moderate rains for Monday night include the Southern Luzon, Mindoro, Romblon, Marinduque, and Palawan.

(So we can expect light to moderate and occasional heavy rains in the coming hours in the said areas.)

(Here in mainland Luzon particularly in Northern and Central Luzon, we can see the cloud bands being formed, which would bring mdoerate to heavy rains, as these are associated with localized thunderstorms.)

Temperatures in Luzon would be slightly colder compared to last week, with 25 to 31 degrees Celsius prevailing over Metro Manila and Puerto Princesa, and 22 to 29 degrees in Tagaytay.  Pagasa said rains brought by isolated thunderstorms may occur in the morning and by afternoon.

Cloudy skies would also be seen in Visayas and Mindanao, largely due to the intertropical convergence zone in the area.  Cebu’s temperature will be at 25 to 31 degrees Celsius, while Tacloban and Iloilo will feel around 26 to 31 degrees.

In Davao, temperatures would be around 25 to 32 degrees Celsius, and 24 to 31 degrees for Cagayan de Oro.

Pagasa warned residents living near slopes and in low-lying areas to monitor their updates as there is a risk of landslides and flooding due to continuous torrential rains.

No gale warning has been raised despite the LPA, which means that seafarers and fisherfolk may set sail, although sea condition may vary from slight to moderate to moderate to rough during thunderstorms.

Read Next
SONA fashion 2020: A mix of simple looks, bold statements
EDITORS' PICK
Heads may roll at BOC, says Palace if sugar smugglers are allowed to use recycled import permits
What to watch out for when selecting a video surveillance solution
DOH reports increase in daily COVID-19 deaths, mostly unvaxxed
House energy committee chair Arroyo bats for cheap electricity
vivo brings to the Philippines a powerful smartphone with a slimmer body, the vivo Y02s for only PHP 6,499
Palace: Biggest supermarkets in PH commit to sell sugar at P70 per kilo
MOST READ
Metro Manila’s No. 1 wanted man arrested, says NCRPO
Alyssa Valdez to miss Creamline’s AVC Cup campaign
Peso loses ground vs US dollar
Mayor bares issues vs closed QC school
Don't miss out on the latest news and information.