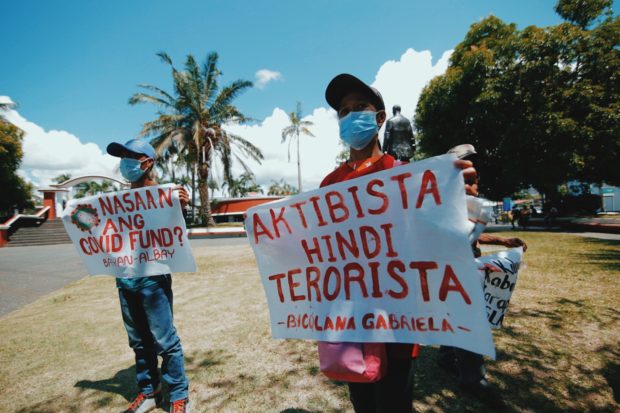 Several groups from Albay stage a protest at the Peñaranda Park in Legazpi City in line with the 5th State of the Nation Address of President Rodrigo Duterte on Monday. GEORGE GIO BRONDIAL / INQUIRER SOUTHERN LUZON

LEGAZPI CITY — Protesters from Bicol progressive groups faced what they call an “intimidation” from police officers on Monday during a pre-State of the Nation Address (SONA) protest in this city.

“There were eight police officers who questioned the legitimacy of our protest,” Nica Ombao, Bicolana Gabriela coordinator told Inquirer. “The National Union of People’s Lawyers (NUPL) has refuted that guidelines.”

Ombao is talking about NUPL’s statement in June saying that “no law, not even the Bayanihan to Heal as One Act, prevents anyone from staging protests during the community quarantine.”

The progressive groups arrived in front of Philippine Coconut Authority in Legazpi City at 7:30 a.m. and were planning to march to Peñaranda Park, also in the city, carrying with them protest placards.

The march to the park was cancelled, but some of the protesters went to the park on their own to continue the protests calling yet again to junk the Anti-Terror Act and to allow all jeepney drivers back in Bicol streets.

The group also called for safer reopening of schools in all levels or, better yet, an academic freeze. 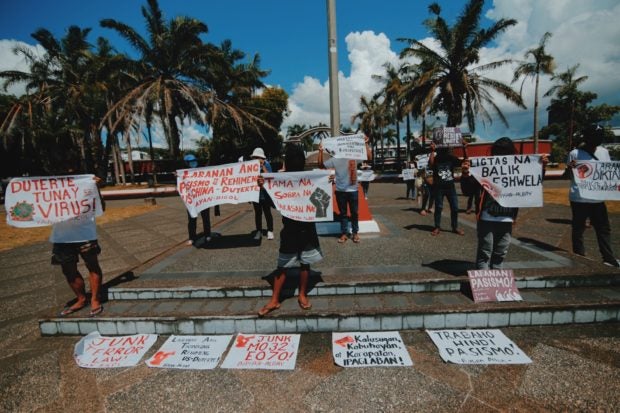 Several groups from Albay stage a protest at the Peñaranda Park in Legazpi City in line with the 5th State of the Nation Address of President Rodrigo Duterte on Monday.
GEORGE GIO BRONDIAL/INQUIRER SOUTHERN LUZON