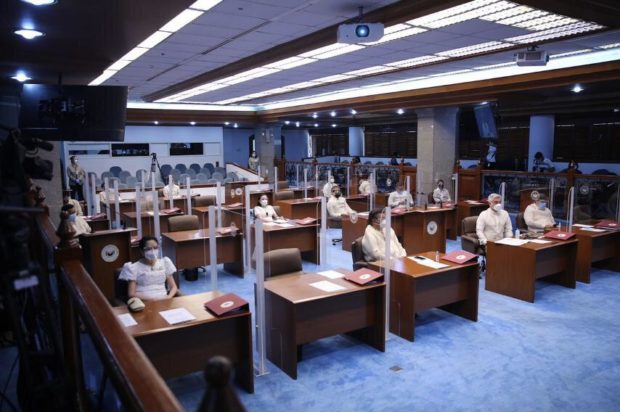 The Senate on Monday, July 27, 2020, opened its second regular session of the 18th Congress ahead of President Rodrigo Duterte’s 5th State of the Nation Address (SONA). Photo courtesy of Sen. Gatchalian’s office

MANILA, Philippines – The Senate on Monday opened its second regular session of the 18th Congress ahead of President Rodrigo Duterte’s penultimate State of the Nation Address (SONA) later in the afternoon.

With 17 senators physically present and six others participating through video conference, Senate President Vicente Sotto III banged the gavel at exactly 10:07 a.m., to open the session.

The Senate and the House of Representatives will hold a joint session at 4 p.m. Monday at the Batasang Pambansa to hear Duterte’s address to the nation.

“I open the 2nd Regular Session of the 18th Congress of the Senate with a sense of urgency and a purpose. As long as we share the burden of the COVID pandemic with other countries of the world, we must continue to work towards saving lives and easing our common anxiety. This truth is unavoidable,” Sotto said.

“The Senate has promptly responded to the needs of our nation. Still, the Senate is ready to do more,” he added.

In previous years, senators would open their session in the morning before traveling from the Senate building in Pasay City to the Batasang Pambansa, the headquarters of the House of Representatives, in Quezon City.

But due to the coronavirus disease 2019 (COVID-19) pandemic, only eight out of the 24 senators will be physically attending this year’s SONA at the Batasang Pambansa.

Earlier, Sotto said the third and final reading approval of the proposed Bayanihan to Recover as One Act, or Bayanihan 2, will be the Senate’s top priority once the chamber resumes its legislative duty for the second regular session.

The Bayanihan 2, which is eyed to replace the Bayanihan to Heal as One Act that already expired in June, provides for the country’s COVID-19 response and recovery plan as well as a P140- billion standby fund.

The Senate is also expected to pass the repackaged Corporate Recovery and Tax Incentives for Enterprises Act (CREATE), formerly the Corporate Income Tax and Incentives Rationalization Act (CITIRA), according to Sotto.

The said measure seeks to “help businesses, especially micro, small and medium enterprises badly hit by the pandemic, rebuild, recover and retain jobs for their employees.”

Among other priority measures include the proposed Medical Scholarship Act, the Expanded Solo Parents Act, the Coconut Farmers and Industry Trust Fund Act, the Reserve Officers’ Training Corps, the creation of the Department of Disaster Resilience, amendments to Public Service Act and the Agrarian or Agricultural Credit Cooperative Condonation Act.