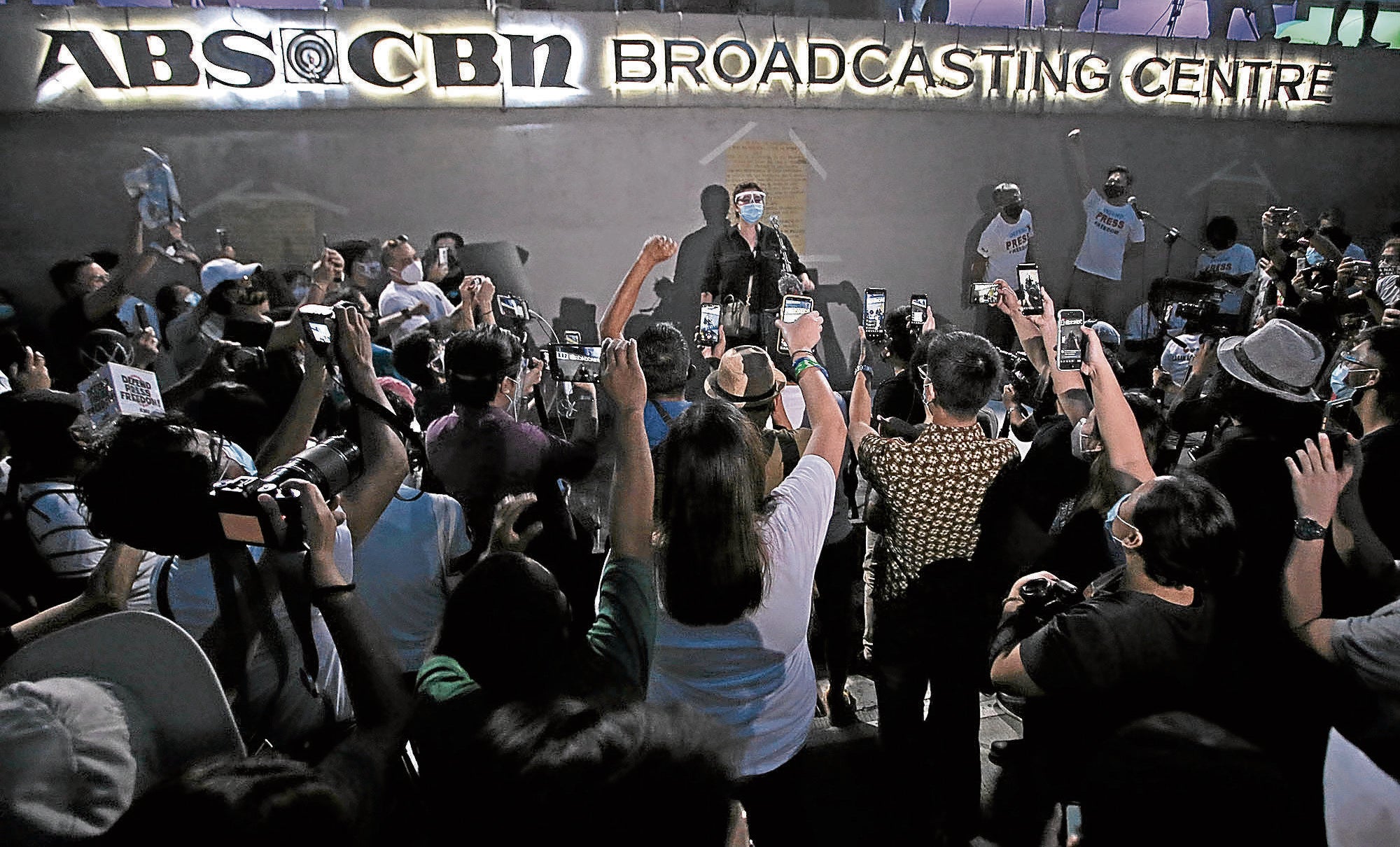 NETWORK’S ANGEL Actress Angel Locsin (center), one of the most outspoken critics of the ABS-CBN shutdown, speaks to a crowd protesting against the closure of the network during a July 18 rally outside the company compound in Quezon City. —RICHARD A. REYES

A group of opposition lawmakers on Thursday said it was pushing for a vote by the entire 305-member House of Representatives on the denial of ABS-CBN’s franchise.

The Makabayan party list bloc said they sent a letter to the House franchise committee on Monday urging the panel to submit its resolution rejecting the network’s franchise application to the plenary for ratification.

“We submit that the decision of the majority of the members of the committee on legislative franchise to deny ABS-CBN a new franchise, despite the absence of compelling reasons, as affirmed by invited resource persons coming from the different regulatory and other agencies during the course of the historical and unprecedented 12 marathon hearings, requires the approval of the entire House of Representatives,” the lawmakers said in their letter.

The Makabayan bloc took the step after its members received notices about the committee’s action. They were the authors of one of the 12 bills giving a franchise to ABS-CBN and a resolution asking the committee to report out a consolidated version of the measures.

On July 10, 70 lawmakers, comprising a majority of regular as well as ex-officio members of the committee, voted in favor of a 40-page technical working group (TWG) report, which recommended the denial of a franchise to the network. Zarate and 10 others voted against it.

The TWG reported that ABS-CBN chair emeritus Eugenio “Gabby” Lopez III had doubtful Filipino citizenship. Its use of Philippine depositary receipts (PDR) was a possible violation of the constitutional prohibition against ownership and management of mass media by foreigners.

ABS-CBN also allegedly committed numerous violations of its previous franchise and practiced questionable and unjust, if not immoral, tax avoidance schemes. It also used a dummy and engaged in “less than exemplary” labor practices.

The TWG recommended at least five legislative actions that the House should take based on the findings from 12 hearings on the franchise, including the crafting of government policies on the practice of issuing PDRs in industries that should be wholly Filipino-owned, and on the digital platform offerings of broadcast companies.

The committee also sought an inquiry on prevailing rules on tax and fiscal incentives given to companies to prevent “abusive” tax avoidance measures and on how ABS-CBN had recovered its assets allegedly without following legal procedures.

But according to the Makabayan lawmakers, a committee cannot order other committees, or the entire House, to investigate the issues it raised against ABS-CBN.

“Thus, we submit that the TWG report and the committee resolution, which now stands as a committee report, requires the approval of the House before it can be implemented,” the letter said.

They questioned how the TWG came up with its recommendation to reject the franchise when its findings were supposedly “full of uncertainties and doubts” and “littered … with a plethora of insecure statements.”

“Even if the TWG report is the most unsure and insecure document ever approved by a committee, the fact is that it was approved by many committee members. The next step, therefore, is to resolve [these] insecurities and doubts through a plenary debate and approval,” they said.

The letter also cited results of a Social Weather Stations (SWS) survey, which found that about 76 percent of the respondents want ABS-CBN to be granted a broadcast franchise.

“Some committee members may question the public antagonism to the committee decision, and it is best, therefore, that such issue be resolved in the plenary where members can decide whether they want to heed the voice of the people or not,” they said.

He said, however, that House rules do not allow an appeal to the plenary of a committee decision on a proposed bill.

“However, the plenary has inherent jurisdiction over the actions of a committee, which is its creation. But, with the ascendancy of [President Duterte] over the House and the subservience of the Speaker to the President, any remedy within the four corners of the House maybe an exercise in futility,” he said.

“Nevertheless, the move of the Makabayan bloc may be able to galvanize support from the members of the House. It’s a good try.”

‘Proper thing to do’

“That [is] the proper thing to do,” he said, adding that the committee has to get the concurrence of the 305 members of the House “for the very contentious decision.”

Speaker Alan Peter Cayetano said it was possible to bring the matter to the plenary, but it would not be the regular procedure for a measure that had been rejected.

“As a general rule, once a franchise is denied, it would no longer go to the plenary. But the plenary, under the Constitution, has all the powers. So it depends on how the House will decide,” he told CNN Philippines in an interview.

“So is it possible? Yes. Is it regular procedure? No. So that is what we will clarify,” he said.

The procedure would entail a motion and if the committee on rules supported it, then it would be approved. But if there is opposition to the motion, a vote would have to be taken, he said.

However, Cayetano believes that the issue should not be put “front and center” especially as the country continues to grapple with the pandemic. —WITH A REPORT FROM NEIL ARWIN MERCADO