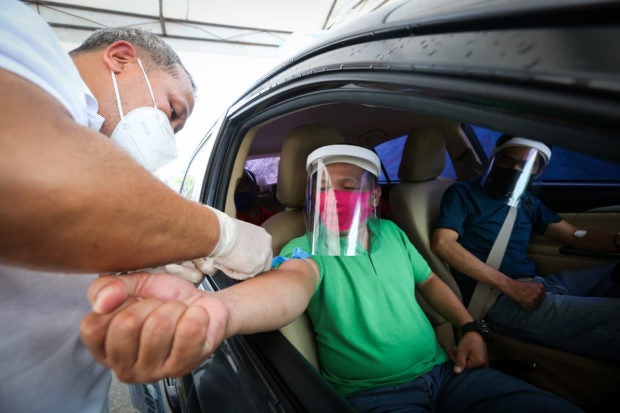 DRIVE-THRU TESTING Motorists stop to be tested for the new coronavirus without getting off their vehicle at a Drive-Thru COVID-19 Testing Area near City Hall in Manila on Wednesday. (Photo by LYN RILLON / Philippine Daily Inquirer)

MANILA, Philippines — The government has the power to quarantine people with mild symptoms of COVID-19, Malacañang said on Wednesday amid an outcry against police plans to take sufferers from their homes and put them in state-run isolation centers.

In a television interview, presidential spokesperson Harry Roque said the government preferred that mild and asymptomatic cases of COVID-19 stay in public quarantines rather than self-isolate at home to minimize the risk of spreading the new coronavirus that causes the severe respiratory ailment to members of their families.

Only sufferers who have their own rooms and bathrooms, and do not live with people with comorbidities can self-isolate at home, Roque said, adding that he hoped to entice the sick to use the quarantine centers by touting their air conditioning, free meals and free Wi-Fi.

The legal basis for the government putting infectious people on quarantine is the inherent police power of the state, Roque said. “This is still promotion of public health,” he said.

Any state has the power to quarantine patients, “so let’s not make a big issue out of it,” he added.

Roque, however, said authorities would not scour houses in search of sick people.

“Let me make it clear: There will be no house-to-house search[es] for [coronavirus-positive people],” he said.

In a separate statement, Roque said sufferers would have to report their condition to local officials or their families could inform the authorities in accordance with the law that requires the reporting of communicable diseases.

Local health workers will be the ones to take ailing people to isolation centers, he said.

“Police presence is merely to provide support or assistance in the transport of patients and the implementation of lockdown in the affected area,” Roque added.

People who refuse to be taken to isolation centers could be forced by the government into quarantine, he said.

“[COVID-19] is a very communicable disease. If they refuse to be isolated, the state, of course, can isolate them,” he said.

But Roque said he hoped things won’t reach that point.

“It’s a paid-for vacation in an air-conditioned facility,” he said. “[The isolation centers] look like hotels so it’s not as if they will be sent to the gulag [or] to solitary confinement.”

Interior Secretary Eduardo Año sparked an outcry by saying on Tuesday that authorities, including the police, would search for infected people and threatened imprisonment for anyone who tried to hide COVID-19 symptoms.

“These searches would only intimidate patients and their families—and what are the police going to do when patients refuse to come with them, shoot them dead?” the group said.

The National Union of Peoples’ Lawyers said the plan would “sow fear in our communities and trample on our rights.”

“Stop giving the police too much undue power. It is easy for the police to abuse their authority. Our grim experience with ‘Oplan: Tokhang’ tells us that this approach will result in more harm and damage than solution to the rising COVID-19 cases,” said Danilo Ramos, leader of Kilusang Magbubukid ng Pilipinas, referring to the police sweeps of the slums in the war on drugs that killed thousands of small-time drug users and peddlers.

Justice Secretary Menardo Guevarra said there was “ample legal basis” for the government to quarantine infected people who could not self-isolate at home. He cited Republic Act No. 11332, the 2018 law that requires the reporting of communicable diseases.

But he said he was not aware of any plans for a house-to-house search for infected people.

“We have not discussed this matter in the [Inter-Agency Task Force for the Management of Emerging Infectious Diseases] nor have I been consulted about it,” Guevarra said on Wednesday.

“Should the [task force] agree there is a need for a house-to-house search [for infected people], it should be the barangay health workers and not police officers who should do that,” he said, stressing that health workers are better suited to decide if transfer to a government-run quarantine is “appropriate.”

Año, a former military chief, appeared to walk back his comments on Wednesday, saying health workers and not police would lead the transfer of infected people to isolation centers.

“The police will just assist local health authorities so I don’t understand why they think this way. That is pure speculation,” he said in a statement, denying accusations of “militarization.”

Año defended the plan, citing the law that requires the reporting of communicable diseases and encourages collaboration with law enforcement “to protect the people from public health threats.”

Police Lt. Gen. Guillermo Eleazar, chief of police operations for the government’s coronavirus response, also denied a lead role for the police in the search for COVID-19 sufferers.

“We will not, on our own, knock on the doors of individual houses,” Eleazar said in a radio interview. “We will accompany the town’s local task force against COVID-19 led by health workers.”

“The local police forces’ presence is only in the form of assistance for any eventuality and especially in escorting the patients to the isolation facilities,” he said in a separate statement.

The Department of Health (DOH) reiterated on Wednesday that mild and asymptomatic cases of COVID-19 must stay in quarantines or isolation centers if they could not meet the requirements for self-isolation at home.

Health Undersecretary Maria Rosario Vergeire said the failure of infected people to follow the DOH guidelines for home quarantine had contributed to the continuing community transmission of the new coronavirus.