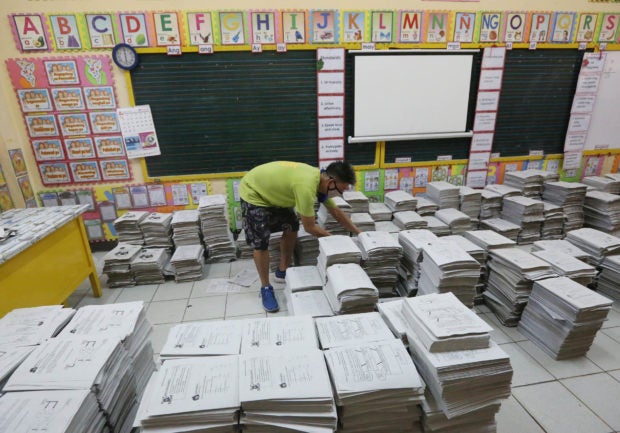 SELF-LEARNING MODULES A schoolteacher at Geronimo Santiago Elementary School in Manila sorts out self-learning modules for students who will study at home under the blended and online instruction format during the public health crisis due to the COVID-19 pandemic. (Photo by MARIANNE BERMUDEZ / Philippine Daily Inquirer)

MANILA, Philippines — Enrollment in kindergarten up to senior high school for the school year 2020-2021 dropped more than 25 percent from a year ago, according to figures from the Department of Education (DepEd).

Private schools registered the biggest decline as more than 300,000 of their students had transferred to public schools this year as the COVID-19 pandemic was ravaging the country’s economy, the DepEd data also showed.

Some 19.14 million public school students and 1.5 million private school students, including alternative learners and persons with disabilities, had been enrolled for this school year as of 8 a.m. on Wednesday, the enrollment deadline.

The public school enrollment of 19.14 million was 84.8 percent of last year’s total, but the 1.5 million enrollment in private schools plunged to just 24.3 percent of what it was a year ago.

The DepEd said enrollment figures also showed that 300,877 out of a total of 323,524 students who had transferred to public schools came from private schools this year. The total included 202,345 students in elementary school, 82,230 in junior high school, 32,455 in senior high school, and 6,494 learners with disabilities.

Reacting to the 27.3-percent decline in national enrollments, Education Undersecretary Jesus Mateo said: “The drop is due to the pandemic.”

In an earlier statement, Education Secretary Leonor Briones attributed the rate of transfer from private to public schools to the economic downturn due to the pandemic. But this would be partially resolved when the economy reopens and people are again employed, she said.

A work-from-home employee in the business process outsourcing industry, who wants to be identified only as Elena, said she transferred her two children from a private school to Dr. Alejandro Alberto Elementary School in Sampaloc, Manila, for economic reasons.

“I will be the one to teach my kids so why will I pay much for distance learning? In public school, modules are given for free. Here, you would only have to spend for gadgets and printing fees,” she said.

But she acknowledged that it would be “hard to focus in an online learning setup. Can we really do that with Zoom?”

She said her family had to buy a new laptop to prepare for her children’s eight-hour online class.

She also had to hire a tutor for P2,000 a month per child to ensure that her children would understand their lessons.

Raymond Basilio, secretary general of the Alliance of Concerned Teachers (ACT), said there were a million out-of- school youth before the pandemic.

Now, the ordinary Filipino family’s concerns are mostly safety and food, he said.

He also cited lack of money for tuition and the loss of jobs of the parents of students as reasons for the drop in enrollments.

ACT Philippines attributed the migration from private to public schools to the worsening economic conditions due to what it said was the government’s failed response to the socioeconomic needs of Filipinos who suffered the effects of the pandemic and the ensuing lockdown.

“Especially since private schools were not able to lower tuition fees as the low enrollment turnout threatened, and, in many cases, have already led to the closure of their education institution for lack of sufficient resources to continue operation,” it said.

Another ACT officer, Jonathan Geronimo, said one private school in Las Piñas City was forced to close down, leaving its 300 students with no choice but to transfer to a public school or skip enrollment this year.

The DepEd said late enrollees for the start of classes on Aug. 24 would still be accepted until the last week of September, provided the students meet 80 percent of the prescribed number of school days and quarterly requirements to pass their previous grade levels.

The DepEd did not provide comparative figures for regional enrollment from previous years.

Briones said the department’s “blended” learning mode of instruction would not force students to go online “if they cannot do it.”

“There are many ways they can learn without necessarily going online. We are now busy preparing online modular materials,” she said. “Our parents should not worry if they do not have gadgets. We are doing everything.”

She cited several choices, such as radio and printed learning manuals.

“Many of our teachers have gadgets, but we are not insisting that they go online. There are other alternatives like television, radio,” she said.

The DepEd is coordinating with the Presidential Communications Operations Office (PCOO) in utilizing the government’s radio and television facilities, she said.

Schools in Isabela province, for instance, were assisted by three radio stations in facilitating the DepEd’s distance learning program, where students are given free radios with USB ports where students could play prerecorded lessons. The dry run would be held next week in the towns of Cordon and San Mariano.

In Sarangani province, the DepEd launched the “LR on wheels,” or the Learning Resources on Wi-Fi hub for Expanded e-learning.